From Peoples Into Nations: A History of Eastern Europe (Hardcover) 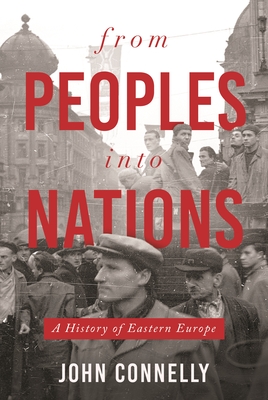 In the 1780s, the Habsburg monarch Joseph II decreed that henceforth German would be the language of his realm. His intention was to forge a unified state from his vast and disparate possessions, but his action had the opposite effect, catalyzing the emergence of competing nationalisms among his Hungarian, Czech, and other subjects, who feared that their languages and cultures would be lost. In this sweeping narrative history of Eastern Europe since the late eighteenth century, John Connelly connects the stories of the region's diverse peoples, telling how, at a profound level, they have a shared understanding of the past. An ancient history of invasion and migration made the region into a cultural landscape of extraordinary variety, a patchwork in which Slovaks, Bosnians, and countless others live shoulder to shoulder and where calls for national autonomy often have had bloody effects among the interwoven ethnicities. Connelly traces the rise of nationalism in Polish, Austro-Hungarian, and Ottoman lands; the creation of new states after the First World War and their later absorption by the Nazi Reich and the Soviet Bloc; the reemergence of democracy and separatist movements after the collapse of communism; and the recent surge of populist politics throughout the region. Because of this common experience of upheaval, East Europeans are people with an acute feeling for the precariousness of history: they know that nations are not eternal, but come and go; sometimes they disappear. From Peoples into Nations tells their story.

John Connelly is the Sidney Hellman Ehrman Professor of History and director of the Institute of Slavic, East European, and Eurasian Studies at the University of California, Berkeley. He is the author of Captive University: The Sovietization of East German, Czech, and Polish Higher Education and From Enemy to Brother: The Revolution in Catholic Teaching on the Jews. He lives in Kensington, California.