How to Win an Election: An Ancient Guide for Modern Politicians (Hardcover) 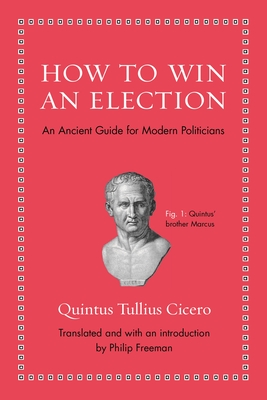 How to Win an Election is an ancient Roman guide for campaigning that is as up-to-date as tomorrow's headlines. In 64 BC when idealist Marcus Cicero, Rome's greatest orator, ran for consul (the highest office in the Republic), his practical brother Quintus decided he needed some no-nonsense advice on running a successful campaign. What follows in his short letter are timeless bits of political wisdom, from the importance of promising everything to everybody and reminding voters about the sexual scandals of your opponents to being a chameleon, putting on a good show for the masses, and constantly surrounding yourself with rabid supporters. Presented here in a lively and colorful new translation, with the Latin text on facing pages, this unashamedly pragmatic primer on the humble art of personal politicking is dead-on (Cicero won)--and as relevant today as when it was written. A little-known classic in the spirit of Machiavelli's Prince, How to Win an Election is required reading for politicians and everyone who enjoys watching them try to manipulate their way into office.

Philip Freeman is the author of many books, including Oh My Gods: A Modern Retelling of Greek and Roman Myths, Alexander the Great, and Julius Caesar (all Simon & Schuster). He received his PhD from Harvard University and holds the Qualley Chair of Classical Languages at Luther College in Decorah, Iowa.