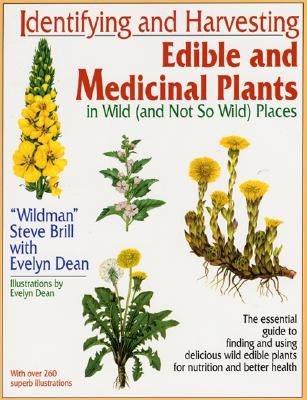 Identifying and Harvesting Edible and Medicinal Plants in Wild (and Not So Wild) Places shows readers how to find and prepare more than five hundred different plants for nutrition and better health. It includes information on common plants such as mullein (a tea made from the leaves and flowers suppresses a cough), stinging nettle (steam the leaves and you have a tasty dish rich in iron), cattail (cooked stalks taste similar to corn and are rich in protein), and wild apricots (an infusion made with the leaves is good for stomach aches and digestive disorders).

More than 260 detailed line drawings help readers identify a wide range of plants -- many of which are suited for cooking by following the more than thirty recipes included in this book. There are literally hundreds of plants readily available underfoot waiting to be harvested and used either as food or as a potential therapeutic. This book is both a field guide to nature's bounty and a source of intriguing information about the plants that surround us.

His Identifying and Harvesting Edible and Medicinal Plants in Wild (and Not-So-Wild) Places (HarperCollins Publishers, 1994) is considered a classic on the subject.His innovative Wild Vegan Cookbook (Harvard Common Press, 2002) is changing the way people think of preparing gourmet food. His Shoots and Greens of Early Spring in Northeastern North America (self-published, 1986 and 2008) teaches people how the foraging season begins, and his Foraging With the Wildman DVD series, along with the website he created, is showing people how it's all done. But he's still best known for having been handcuffed and arrested by undercover New York City park rangers for eating a dandelion in Central Park!