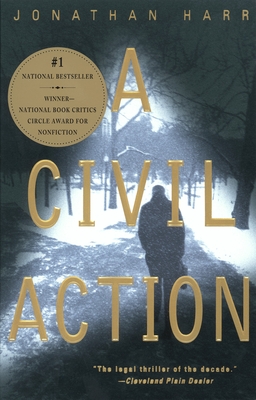 #1 NATIONAL BESTSELLER • NATIONAL BOOK CRITICS CIRCLE AWARD WINNER • The true story of one man so determined to take down two of the nation's largest corporations accused of killing children from water contamination that he risks losing everything.

"The legal thriller of the decade." —Cleveland Plain Dealer

Described as “a page-turner filled with greed, duplicity, heartache, and bare-knuckle legal brinksmanship" by The New York Times, A Civil Action is the searing, compelling tale of a legal system gone awry—one in which greed and power fight an unending struggle against justice. Yet it is also the story of how one man can ultimately make a difference.  Representing the bereaved parents, the unlikeliest of heroes emerges: a young, flamboyant Porsche-driving lawyer who hopes to win millions of dollars and ends up nearly losing everything, including his sanity. With an unstoppable narrative power reminiscent of Truman Capote’s In Cold Blood, A Civil Action is an unforgettable reading experience that will leave the reader both shocked and enlightened.

A Civil Action was made into a movie starring John Travolta and Robert Duvall.

JONATHAN HARR is the author of the national bestseller A Civil Action, winner of the National Book Critics Circle Award for Nonfiction and The Lost Painting, a New York Times bestseller. He is a former staff writer at the New England Monthly and has written for The New Yorker and The New York Times Magazine. He lives and works in Northampton, Massachusetts, where he has taught nonfiction writing at Smith College.

"Whether in truth or fiction, I have never read a more compelling chronicle of litigation." —John Grisham

"A page-turner. Rich and vivid ... eventful and gripping." —The New York Times

"Once you start A Civil Action, you probably will not be able to put it down." —Washington Post Book World

"The legal thriller of the decade." —Cleveland Plain Dealer