A Greeting of the Spirit: Selected Poetry of John Keats with Commentaries (Hardcover) 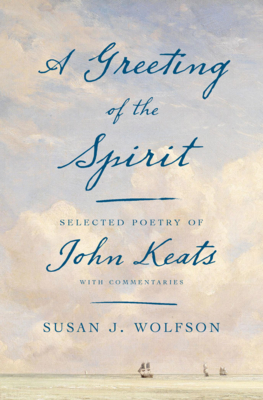 John Keats's career as a published poet spanned scarcely more than four years, cut short by his death early in 1821 at age twenty-five. Yet in this time, he produced a remarkable--and remarkably wide-ranging--body of work that has secured his place as one of the most influential poets in the British literary tradition. Celebrated Keats scholar Susan J. Wolfson presents seventy-eight selections from his work, each accompanied by a commentary on its form, style, meanings, and relevant contexts. In this edition, readers will rediscover a virtuoso poet, by turns lively, experimental, self-ironizing, outrageous, and philosophical. Wolfson includes such well-known favorites as Ode to a Nightingale, Ode on a Grecian Urn, To Autumn, La Belle Dame sans Merci, and The Eve of St. Agnes, as well as less familiar poems, several in letters to family and friends never meant for publication. Her selections redefine the breadth and depth of Keats's poetic imagination, from intellectual jests and satires to erotic bandying, passionate confessions, and reflections on mortality. The selections, presented in their order of composition, convey a chronicle of Keats's artistic and personal evolution. Wolfson's revealing commentaries unfold the lively complexities of his verbal arts and stylistic experiments, his earnest goals and nervous apprehensions, and the pressures of politics and literary criticism in his day. In critically attentive and conversational prose, Wolfson encourages us to experience Keats in the way that he himself imagined the language of poetry: as a living event, a cooperative experience shared between author and reader.