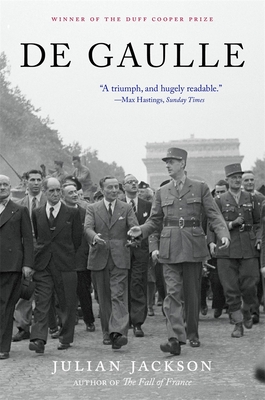 Winner of the Duff Cooper Prize
Winner of the Elizabeth Longford Prize
A New Yorker, Financial Times, Spectator, Times, and Telegraph Book of the Year

In this definitive biography of the mythic general who refused to accept the Nazi domination of France, Julian Jackson captures Charles de Gaulle as never before. Drawing on unpublished letters, memoirs, and papers from the recently opened de Gaulle archive, he shows how this volatile visionary of staunch faith and conservative beliefs infuriated Churchill, challenged American hegemony, recognized the limitations of colonial ambitions in Algeria and Vietnam, and put a broken France back at the center of world affairs. "With a fluent style and near-total command of existing and newly available sources...Julian Jackson has come closer than anyone before him to demystifying this conservative at war with the status quo, for whom national interests were inseparable from personal honor."
--Richard Norton Smith, Wall Street Journal "A sweeping-yet-concise introduction to the most brilliant, infuriating, and ineffably French of men."
--Ross Douthat, New York Times "Classically composed and authoritative...Jackson writes wonderful political history."
--Adam Gopnik, New Yorker "A remarkable book in which the man widely chosen as the Greatest Frenchman is dissected, intelligently and lucidly, then put together again in an extraordinary fair-minded, highly readable portrait. Throughout, the book tells a thrilling story."
--Antonia Fraser, New Statesman "Makes awesome reading, and is a tribute to the fascination of its subject, and to Jackson's mastery of it...A triumph, and hugely readable."
--Max Hastings, Sunday Times