Butterfly Politics: Changing the World for Women, with a New Preface (Paperback) 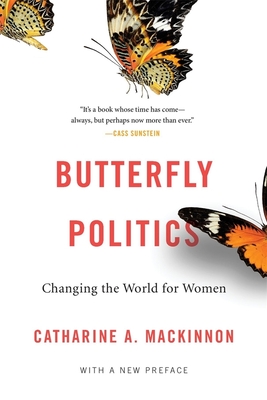 By Catharine A. MacKinnon
$19.95
Ships from Warehouse, Usually in 1-8 Days

"Sometimes ideas change the world. This astonishing, miraculous, shattering, inspiring book captures the origins and the arc of the movement for sex equality. It's a book whose time has come--always, but perhaps now more than ever."
--Cass Sunstein, coauthor of Nudge

Under certain conditions, small simple actions can produce large and complex "butterfly effects." Butterfly Politics shows how Catharine A. MacKinnon turned discrimination law into an effective tool against sexual abuse--grounding and predicting the worldwide #MeToo movement--and proposes concrete steps that could have further butterfly effects on women's rights. Thirty years after she won the U.S. Supreme Court case establishing sexual harassment as illegal, this timely collection of her previously unpublished interventions on consent, rape, and the politics of gender equality captures in action the creative and transformative activism of an icon.

"MacKinnon adapts a concept from chaos theory in which the tiny motion of a butterfly's wings can trigger a tornado half a world away. Under the right conditions, she posits, small actions can produce major social transformations."
--New York Times

"MacKinnon is] radical, passionate, incorruptible and a beautiful literary stylist... Butterfly Politics is a devastating salvo fired in the gender wars... This book has a single overriding aim: to effect global change in the pursuit of equality."
--The Australian

"Sexual Harassment of Working Women was a revelation. It showed how this anti-discrimination law--Title VII--could be used as a tool... It was the beginning of a field that didn't exist until then."
--U.S. Supreme Court Justice Ruth Bader Ginsburg