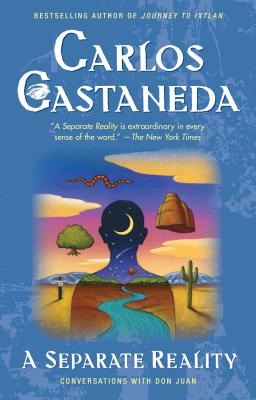 Carlos Castaneda takes the reader into the very heart of sorcery, challenging both imagination and reason, shaking the very foundations of our belief in what is "natural" and "logical."

In 1961, a young anthropologist subjected himself to an extraordinary apprenticeship with Yaqui Indian spiritual leader don Juan Matus to bring back a fascinating glimpse of a Yaqui Indian's world of "non-ordinary reality" and the difficult and dangerous road a man must travel to become "a man of knowledge." Yet on the bring of that world, challenging to all that we believe, he drew back. Then in 1968, Carlos Castaneda returned to Mexico, to don Juan and his hallucinogenic drugs, and to a world of experience no man from our Western civilization had ever entered before.

Born in 1925 in Peru, anthropologist Carlos Castaneda wrote a total of fifteen books, which sold eight million copies worldwide and were published in seventeen different languages. In his writing, Castaneda describes the teaching of don Juan, a Yaqui sorcerer and shaman. His works helped define the 1960's and usher in the New Age movement. Even after his death in 1998, his books continue to inspire and influence his many devoted fans.

Praise for A Separate Reality

"A Separate Reality is extraordinary in every sense of the word."
— The New York Times

Praise for the groundbreaking work of bestselling author Carlos Castaneda

"Extraordinary in every sense of the word."
— The New York Times

"It is impossible to view the world in quite the same way."
— Chicago Tribune

"Taken together [Castaneda's books] form a work among the best that the science of anthropology has produced."
— The New York Times Book Review