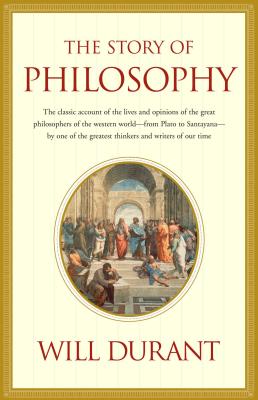 A brilliant and concise account of the lives and ideas of the great philosophers—Plato, Aristotle, Bacon, Spinoza, Voltaire, Kant, Schopenhauer, Spencer, Nietzsche, Bergson, Croce, Russell, Santayana, James, and Dewey—The Story of Philosophy is one of the great books of our time. Few write for the non-specialist as well as Will Durant, and this book is a splendid example of his eminently readable scholarship. Durant’s insight and wit never cease to dazzle; The Story of Philosophy is a key book for any reader who wishes to survey the history and development of philosophical ideas in the Western world.

Will Durant (1885–1981) was awarded the Pulitzer Prize (1968) and the Presidential Medal of Freedom (1977). He spent more than fifty years writing his critically acclaimed eleven-volume series, The Story of Civilization (the later volumes written in conjunction with his wife, Ariel). A champion of human rights issues, such as the brotherhood of man and social reform, long before such issues were popular, Durant’s writing still educates and entertains readers around the world.

The New York Times A delight.