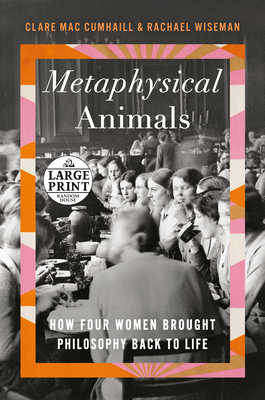 The history of European philosophy is usually constructed from the work of men. In Metaphysical Animals, a pioneering group biography, Clare Mac Cumhaill and Rachael Wiseman offer a compelling alternative. In the mid-twentieth century Elizabeth Anscombe, Mary Midgley, Philippa Foot, and Iris Murdoch were philosophy students at Oxford when most male undergraduates and many tutors were conscripted away to fight in the Second World War. Together, these young women, all friends, developed a philosophy that could respond to the war’s darkest revelations.

Neither the great Enlightenment thinkers of the past, the logical innovators of the early twentieth century, or the new Existentialist philosophy trickling across the Channel, could make sense of this new human reality of limitless depravity and destructive power, the women felt. Their answer was to bring philosophy back to life. We are metaphysical animals, they realized, creatures that can question their very being. Who am I? What is freedom? What is human goodness? The answers we give, they believed, shape what we will become.

Written with expertise and flair, Metaphysical Animals is a lively portrait of women who shared ideas, but also apartments, clothes and even lovers. Mac Cumhaill and Wiseman show how from the disorder and despair of the war, four brilliant friends created a way of ethical thinking that is there for us today.

Dr CLARE MAC CUMHAILL and Dr RACHAEL WISEMAN are philosophy lecturers and friends. Mac Cumhaill is an expert in the philosophy of perception and aesthetics at Durham University, home of the Mary Midgley Papers; Wiseman lectures at Liverpool University and is a recognised authority on the work of Elizabeth Anscombe. They are the co-directors of www.womeninparenthesis.co.uk, a scholarly project that makes the case for analytic philosophy’s first all-female philosophical school.

"Absorbing. . . each of this book’s subjects produced work that, in seeking to reconnect 'human life, action and perception' with morality, remains vitally relevant."
--The New Yorker

“Metaphysical Animals makes impressively light-footed work of bringing philosophy in. The reader feels as if in the midst of a lively discussion over crumpets at a Lyons tearoom . . . The payoff is four glorious heroines, confident and curious, focused on the world and not themselves.”
--The Spectator (U.K.)

“Lively . . . This fascinating work of historico-logico-feminism shows . . . how women fought their way on to the world stage of philosophy and turned its spotlight away from an analytical desert on to what was really important - moral clarity, wisdom and truth.”
--Sunday Times (U.K.)

“Irresistible. . . Highly evocative . . . Bring[s] to life an important episode in intellectual history, and [has] made me again grateful that I was for a time a contemporary of these unforgettable women.”
--London Review of Books

“The narrative is of four brilliant women finding their voices, opposing received wisdom, and developing an alternative picture of human beings and their place in the world . . . To read this story is to be reminded . . . that the life of the mind can be as intense and eventful as friendship itself.”
--Guardian (U.K.)

"Dishy and intimate, you’ll feel as if you’ve been invited to afternoon tea with the smartest set on campus."
--Chicago Review of Books

"Engaging. . . Stories that rival in passion and intrigue anything that Elena Ferrante’s Neapolitan Novels have to offer and contain much to interest specialists as well as general readers."
--The Boston Review

"Spectacularly clever . . . Cozy and yet cosmic, Metaphysical Animals is a great choice for amateur philosophers and appreciators of well-written, history-making accounts alike."
--The A.V. Club

"It’s a compelling story, about four brilliant thinkers . . . This is a world where people gossip. This is a world that is — that most criminally unphilosophical of all things perhaps — cozy. . .  It might not always be recognizably “philosophical” — but this is the point of the book . . . a masterful argument, made not only by the book’s content, but by its form. Philosophy and life are united, the book seems to be saying: not only by default, but as upbringing; as education. A philosophical life is a life lived with others — however cozy those relationships might be."
--Gawker

"Captivating...an illuminating portrait of philosophy...[Mac Cumhaill and Wiseman] succeed splendidly at showing how Anscombe, Midgley, Murdoch, and Foot personified the truism that philosophy is the primal stuff of life."
--The American Scholar

“A vivid picture of the times, and of the formative experiences of the four women who would go on to become some of the most influential philosophers of the 20th century. . . As with any good history, there is something eerily prescient in Mac Cumhaill and Wiseman’s account of a university educated cultural elite for whom moral discourse had declined to the point of linguistic one-upmanship—and the subsequent need to reconnect with a more robust notion of virtue, human flourishing, and what makes for a good life.”
--The American Conservative

"In their unfashionable view that it is possible, as Mac Cumhaill and Wiseman put it, to 'use [the] language of morals and speak of objective moral truth', and their conviction that human beings are 'social, creative, curious, spiritual' creatures rather than mere 'efficient calculating machines', the four heroines of this book were untimely. They resisted the zealots who thought most of the traditional problems of philosophy could be dissolved provided we paid close enough attention to the way language works. As an account of four young women who sought to 'bring philosophy back to life', Metaphysical Animals is a portrait in intellectual courage."
--The Financial Times (U.K)

"By highlighting in very accessible detail a colorful array of the women’s philosophical positions, speeches, attacks, and defenses...[Metaphysical Animals] makes a much-needed case for the value of philosophy to life as a whole, and for the reader’s own interest in pursuing such a life for oneself...Endlessly readable."
--National Review

“As the authors state, on the heels of a pandemic, 'it is perhaps time to ask again, as these women did after the Second World War: What sort of animal is a human being?' Philosophy aficionados will relish the discussion."
--Booklist

“This edifying debut by philosophy professors Mac Cumhaill and Wiseman tells the stories of four female philosophy pioneers: Mary Midgley, Elizabeth Anscombe, Philippa Foot, and Iris Murdoch . . .  the research is thorough and provides a cogent counternarrative to traditional male-centric histories of mid–20th-century philosophy. These four philosophers might not appear on standard syllabi, but this detailed chronicle makes a persuasive case that they should."
--Publishers Weekly

“How did it come about that in the epoch of the greatest imaginable political evil, of the Holocaust and of the Gulag, of Hitler and Stalin, Oxford philosophy tended to empty moral terms of any absolute significance? It fell to four women philosophers, each born in the years between 1918 and 1920, to object to this sad state of affairs. They then set about - each in her different way - a root-and-branch reform of moral philosophy. Mac Cumhaill and Wiseman have written a wonderful, important and also a necessary book, which sets the record straight, is brim-full of fascinating detail and which honours and celebrates a remarkable quartet of women thinkers.”
--Peter Conradi