Betrayal: The Final Act of the Trump Show (Paperback) 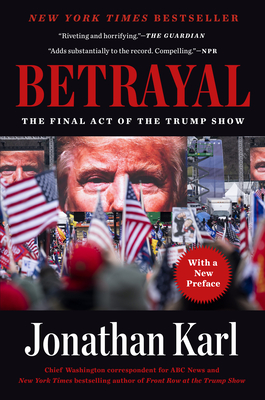 An NPR Book of the Day

Picking up where the New York Times bestselling Front Row at the Trump Show left off, this is the explosive look at the aftermath of the election—and the events that followed Donald Trump’s leaving the White House all the way to January 6—from ABC News' chief Washington correspondent.

Nobody is in a better position to tell the story of the shocking final chapter of the Trump show than Jonathan Karl. As the reporter who has known Donald Trump longer than any other White House correspondent, Karl told the story of Trump’s rise in the New York Times bestseller Front Row at the Trump Show. Now he tells the story of Trump’s downfall, complete with riveting behind-the-scenes accounts of some of the darkest days in the history of the American presidency and packed with original reporting and on-the-record interviews with central figures in this drama who are telling their stories for the first time.

This is a definitive account of what was really going on during the final weeks and months of the Trump presidency and what it means for the future of the Republican Party, by a reporter who was there for it all. He has been taunted, praised, and vilified by Donald Trump, and now Jonathan Karl finds himself in a singular position to deliver the truth.

Jonathan Karl is the chief Washington correspondent for ABC News and co-anchor of This Week with George Stephanopoulos. Karl has covered every major beat in Washington, D.C., including the White House, Capitol Hill, the Pentagon, and the State Department. He has reported from the White House under four presidents and fourteen press secretaries. He is a former president of the White House Correspondents' Association. Front Row at the Trump Show was an instant New York Times bestseller.

“One of the books that will define the month of November is Betrayal, the new end-of-Trump-era tome by ABC's Jonathan Karl. Betrayal convincingly makes the case that the period between Election Day and Inauguration Day was even more precarious than we knew at the time. Karl isn't a progressive pundit or a hyperbolic columnist. He is one of the most-respected correspondents in D.C. He and so many others are saying: America was on the precipice of a constitutional crisis. And we could wind up back there again soon.”—Brian Stelter, CNN's Reliable Sources newsletter

“In the follow-up to Front Row at the Trump Show, the ABC News political correspondent delivers fresh news on the last months of the Trump presidency.”—Kirkus (starred review)

“ABC’s man in Washington delivers a second riveting and horrifying read about how close America came to disaster.”—The Guardian

“As a long-time TV reporter, ABC News chief Washington correspondent Jonathan Karl brings an eye for life as presented on screen that is acutely appropriate for the Trump saga. That alone might justify widening our Trump lit shelf, but Karl also adds substantially to the record of this parlous period—especially in the chaos of its final months.... On substance, and on the most important subject in Betrayal, Karl shows no hesitance or equivocation. Karl sees Trump as a past, present, and future threat to the orderly process of American politics and the constitutional separation of powers far beyond that posed by past presidents (or would-be presidents).... Enough of this material is new, or renewed in Karl's retelling, that it can all be compelling to read once again—even for those who have read more Trump books than they can count on their fingers ('We few, we happy few, we band of brothers...').”—NPR

“A good corrective to the opportunistic rewriting of what happened between the election and Jan. 6.”—The Washington Post

“Documents the historic presidential election, unprecedented claims of fraud, the January insurrection at the U.S. Capitol and the stirrings of the novel COVID-19 virus that marked the final days of former President Donald Trump's presidency. Karl, chief Washington correspondent for ABC News, is also the author of the New York Times bestseller Front Row at the Trump Show, published in 2020. The veteran journalist has indeed had a front row seat throughout the Trump administration. Choice accounts have made their way into Betrayal."—USA Today

“One of the most influential political media figures in the news business. As co-anchor of This Week, Karl is at the helm of one of the most influential Sunday political talk shows in the country. As a chief political correspondent for ABC News, Karl continues to provide crucial reporting, and his years of experience as a tough questioner on the White House beat give him journalistic cred that puts him near the top of the pack. Karl’s influence is bolstered by his unrivaled relationships. There may be no reporter better connected with both sides of the political aisle than Karl. That allows him to keep a step ahead of the competition and makes him a coveted guest on the cable networks to discuss his scoops.” —Mediaite