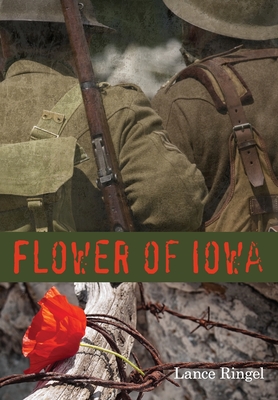 Lance Ringel's Flower of Iowa is a sprawling tale of battle and romance during the First World War, the four years that tore Europe in half and hastened the end of an era. In the tradition of stirring historical novels, this grand epic showcases courage, the resilience of the human spirit, and the transformative power of love. Flower of Iowa recalls Hemingway's A Farewell to Arms, if that celebrated tale of love during wartime had featured two men at the bruised heart of the story.

The novel is set against the turbulent backdrop of France during the final months of World War I. Na ve, idealistic American soldier Tommy Flowers, a small-town boy from the Midwest, struggles to become a good soldier in the trenches. He draws the attention of Nicole Lacroix, a free-spirited French barmaid, but soon finds himself in a rivalry for her affections with his brash Australian lieutenant, Jamie Colbeck. At the same time, however, Tommy becomes best pals with savvy young British soldier David Pearson. The friendship soon develops an unexpected intimacy. Baffled by their feelings, but committed to exploring them further, Tommy and David do everything to spend time together, even after David is wounded and sent home to England to convalesce.

Flower of Iowa is meticulously researched, documenting the pivotal battles of 1918, life at the front lines, and the everyday challenges and tragedies facing the soldiers of the Great War. Author Ringel has created an instant classic, deeply compelling and authentic, recalling a fraught time when love between two men was territory as perilous and uncharted as No Man's Land.