Love's Next Meeting: The Forgotten History of Homosexuality and the Left in American Culture (Hardcover) 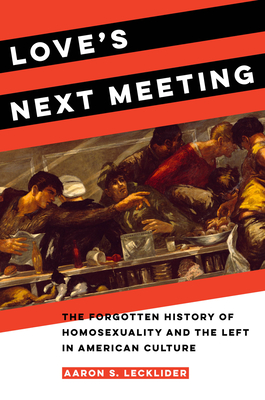 How queerness and radical politics intersected—earlier than you thought.

Well before Stonewall, a broad cross section of sexual dissidents took advantage of their space on the margins of American society to throw themselves into leftist campaigns. Sensitive already to sexual marginalization, they also saw how class inequality was exacerbated by the Great Depression, witnessing the terrible bread lines and bread riots of the era. They participated in radical labor organizing, sympathized like many with the early prewar Soviet Union, contributed to the Republicans in the Spanish Civil War, opposed US police and state harassment, fought racial discrimination, and aligned themselves with the dispossessed. Whether they were themselves straight, gay, or otherwise queer, they brought sexual dissidence and radicalism into conversation at the height of the Left's influence on American culture.

Combining rich archival research with inventive analysis of art and literature, Love’s Next Meeting explores the relationship between homosexuality and the Left in American culture between 1920 and 1960. Aaron S. Lecklider uncovers a lively cast of individuals and dynamic expressive works, revealing remarkably progressive engagement with homosexuality among radicals, workers, and the poor. Leftists connected sexual dissidence with radical gender politics, antiracism, and challenges to censorship and obscenity laws through the 1920s and 1930s. In the process, a wide array of activists, organizers, artists, and writers laid the foundation for a radical movement through which homosexual lives and experiences were given shape and new political identities were forged. Love's Next Meeting cuts to the heart of some of the biggest questions in American history: questions about socialism, about sexuality, about the supposed clash still making headlines today between leftist politics and identity politics. What emerges is a dramatic, sexually vibrant story of the shared struggles for liberation across the twentieth century.

Aaron S. Lecklider is Professor of American Studies at the University of Massachusetts Boston and author of Inventing the Egghead: The Battle over Brainpower in American Culture.

"Nothing less than revelatory. . . . As Lecklider shows, through a combination of meticulous archival research and astute, often surprising analysis, in the decades before Stonewall, homosexual and gender nonconforming men and women were fighting for liberation through involvement with the Left. . . . They took part in radical labor organizing, joined the fight against Fascism in the Spanish Civil War, opposed racism, sexism, and state and police repression. They were intersectional avant la lettre."
— PopMatters

“Rather than treat political radicalism and dissident sexuality as discrete phenomena, Lecklider convincingly demonstrates how sexual “deviance” and anti-capitalist views coevolved alongside racial and immigrant justice and women’s liberation in the context of the US's diversifying urban centers. . . . Students of sexuality, American radicalism, and urban history will learn much from Love’s Next Meeting.”
— CHOICE

“Lecklider traces a usable past for queer-Left politics that is saturated with humor and memorable detail. . . . Love’s Next Meeting makes a major contribution to histories of sexuality, queer politics, the Left, and American culture. Deeply researched, powerfully argued, and passionately written."
— Journal of the History of Sexuality