Red Round Globe Hot Burning: A Tale at the Crossroads of Commons and Closure, of Love and Terror, of Race and Class, and of Kate and Ned Despard (Hardcover) 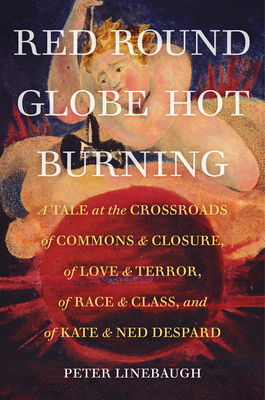 On February 21, 1803, Colonel Edward (Ned) Marcus Despard was publicly hanged and decapitated in London before a crowd of 20,000 for organizing a revolutionary conspiracy to overthrow King George III. His black Caribbean wife, Catherine (Kate), helped to write his gallows speech in which he proclaimed that he was a friend to the poor and oppressed. He expressed trust that “the principles of freedom, of humanity, and of justice will triumph over falsehood, tyranny, and delusion.”

And yet the world turned. From the connected events of the American, French, Haitian, and failed Irish Revolutions, to the Anthropocene’s birth amidst enclosures, war-making global capitalism, slave labor plantations, and factory machine production, Red Round Globe Hot Burning throws readers into the pivotal moment of the last two millennia. This monumental history, packed with a wealth of detail, presents a comprehensive chronicle of the resistance to the demise of communal regimes. Peter Linebaugh’s extraordinary narrative recovers the death-defying heroism of extended networks of underground resisters fighting against privatization of the commons accomplished by two new political entities, the U.S.A. and the U.K., that we now know would dispossess people around the world through today. Red Round Globe Hot Burning is the culmination of a lifetime of research—encapsulated through an epic tale of love.

Peter Linebaugh is a historian and the author of The Magna Carta Manifesto,The Incomplete, True, Authentic, and Wonderful History of May Day, and Stop, Thief!, among many others, and the co-author, with Marcus Rediker, of The Many-Headed Hydra. His articles have appeared in publications that include CounterPunch, the New Left Review, and Radical History Review.

“Peter Linebaugh is acknowledged as a chronicler with a left-wing view. He is also described as a historian of genius. His book presents us with the facts, and what a glorious luxury that is. But of course we have a choice about which facts we want to examine, and he assiduously takes us up neglected side roads on a journey to America, England, Haiti, Honduras, Ireland and Nicaragua. And to prison. In Red Round Globe Hot Burning he invites us to benefit from his lifetime of reading and writing.”
— The Irish Times

"Red Round Globe Hot Burning is a disturbing and challenging book. It kept me awake and note-taking through a whole night. ... Linebaugh’s exploration of the assault on the Commons and how our antecedents struggled to resist the depredations is an invaluable education."
— International Socialism

"No one writes like Peter Linebaugh. Perhaps no one would dare to write like Linebaugh, a singular quality that will be found on virtually every page. . . . While it is nearly impossible to convey the flow of subjects embodied in Red Round Globe Hot Burning, the sweep of interracial history, the place of seemingly ordinary people in challenging the very basis of class society, will be understood better by those reading this worthy volume."

“Peter Linebaugh has produced another masterful history ‘from below' . . . . In language that is sometimes visceral, imaginative and often sublimely eloquent he analyses the conditions in which people were living and working, making connections, while leaving the reader with a global overview of the struggle against colonial and imperial power.”

“Offers unconventional biography and unconventional history. Linebaugh goes where biographers and historians are often taught not to go: to places where there are no archival records and where a writer has to be inventive and imaginative. . . . Few tomes are as much fun to read."
— Counterpunch

“Far-ranging and fascinating. . . . It is impossible to summarize briefly the enormously rich content of this work.”
— Fifth Estate magazine

“Red Round Globe Hot Burning is [Linebaugh's] greatest masterpiece yet in a lifetime of triumphs. It is a mind-blowing contribution to his lifelong quest for the commons. . . . You have a writer of such extraordinary power that reading him can move you to tears (and will always lift your spirits).”
— Independent Left

“An erudite work by a scholar who adapted classic ‘history from below’ to more diverse subjects, while integrating environmental history and literary studies . . . Red Round Globe Hot Burning will hold the interest of a wide array of historians. The vignettes collected in the book display the burning power of ideas in a period of tumultuous change.”