My Inventions: And Other Writings (Dover Thrift Editions) (Paperback) 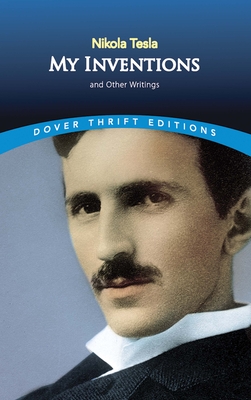 By Nikola Tesla
Sorry, Not Available through UPB
Out of Print

One of science's great unsung heroes, Nikola Tesla (1856-1943) was a prophet of the electronic age. His research laid much of the groundwork for modern electrical and communication systems, and his impressive accomplishments include development of the alternating-current electrical system, radio, the Tesla coil transformer, wireless transmission, and fluorescent lighting. Yet his name and work are only dimly recognized today: Tesla's research was so groundbreaking that many of his contemporaries failed to understand it, and other scientists are unjustly credited for his innovations.
The visionary scientist speaks for himself in this volume, originally published in 1919 as a six-part series in Electrical Experimenter magazine. Tesla recounts his boyhood in Croatia, his schooling and work in Europe, his collaboration with Thomas Edison, and his subsequent research. This edition includes the essay The Problem of Increasing Human Energy: With Special Reference to the Harnessing of the Sun's Energy, which anticipates latter-day advances in environmental technology. Written with wit and lan, this memoir offers fascinating insights into one of the great minds of modern science.

Inventor Nikola Tesla (1856-1943) emigrated to the United States from his native Croatia in 1884 to work for Thomas Edison. He contributed to the development of the alternating-current electrical system, which made the universal transmission and distribution of electricity possible. George Westinghouse purchased the patents to Tesla's induction motor and made it the basis of the Westinghouse power system, which underlies the modern electrical power industry.