The Philosophy of Set Theory: An Historical Introduction to Cantor's Paradise (Dover Books on Mathematics) (Paperback) 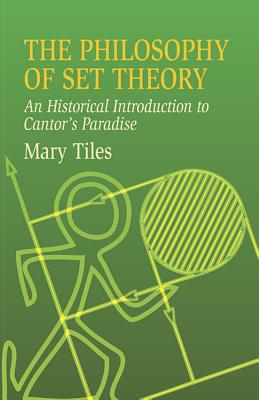 A century ago, Georg Cantor demonstrated the possibility of a series of transfinite infinite numbers. His methods, unorthodox for the time, enabled him to derive theorems that established a mathematical reality for a hierarchy of infinities. Cantor's innovation was opposed, and ignored, by the establishment; years later, the value of his work was recognized and appreciated as a landmark in mathematical thought, forming the beginning of set theory and the foundation for most of contemporary mathematics.
As Cantor's sometime collaborator, David Hilbert, remarked, No one will drive us from the paradise that Cantor has created. This volume offers a guided tour of modern mathematics' Garden of Eden, beginning with perspectives on the finite universe and classes and Aristotelian logic. Author Mary Tiles further examines permutations, combinations, and infinite cardinalities; numbering the continuum; Cantor's transfinite paradise; axiomatic set theory; logical objects and logical types; and independence results and the universe of sets. She concludes with views of the constructs and reality of mathematical structure.
Philosophers with only a basic grounding in mathematics, as well as mathematicians who have taken only an introductory course in philosophy, will find an abundance of intriguing topics in this text, which is appropriate for undergraduate-and graduate-level courses.