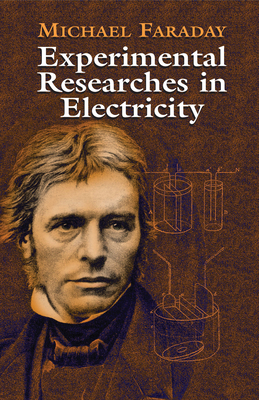 Michael Faraday (1791-1867) was the greatest physicist of the nineteenth century, a pioneer in experimentation in the fields of electricity and magnetism. He is best known for his discovery of the principle of electromagnetic induction and the laws of electrolysis. In Experimental Researches in Electricity, first published in three volumes between 1839 and 1855, Faraday discusses the inquiries that led to his development of the first dynamo (the precursor of modern dynamos and generators), and his establishment of the foundations of classical field theory. His descriptions contain scarcely a hint of mathematics, and he relates the progress of his experiments in direct, clear language. Using the primitive tools available to him in his time, in conjunction with his great imaginative gifts, Faraday explains how he arrived at his profound conclusions with stunning simplicity.
The writing is interesting and the expositions are impressive. -- Florida Scientist.

Michael Faraday: An Electric Personality A major figure in nineteenth-century science, Michael Faraday (1791-1867) made immense contributions to the study of electricity and magnetism, discovering the laws of electromagnetic induction and electrolysis. His experiments are the foundation of subsequent electromagnetic technology. He also had a sense of humor. When the Prime Minister of England William Gladstone asked Faraday what the usefulness of electricity would be, Faraday famously replied, Why, Sir, there is every possibility that you will soon be able to tax it! In addition to being a great experimenter, Faraday had the gift of exposition for a popular audience, as seen in the books which Dover has reprinted, The Forces of Matter (2010), Experimental Researches in Electricity (2004), and perhaps his most famous single book for the general reader, The Chemical History of a Candle (2003). It is reliably reported that Einstein had a photograph of Faraday on the wall of his study alongside portraits of Isaac Newton and James Clerk Maxwell. In the Author's Own Words: The world little knows how many of the thoughts and theories which have passed through the mind of a scientific investigator have been crushed in silence and secrecy by his own severe criticism and adverse examination: that in the most successful instances not a tenth of the suggestions, the hopes, the wishes, the preliminary conclusions have been realized. -- Michael Faraday