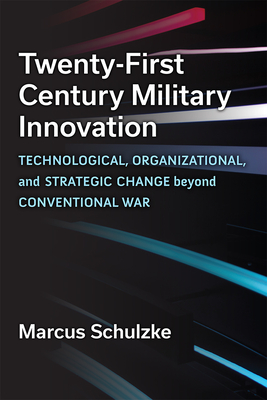 Contemporary war is as much a quest for decisive technological, organizational, and doctrinal superiority before the fighting starts as it is an effort to destroy enemy militaries during battle. Armed forces that are not actively fighting are instead actively reengineering themselves for success in the next fight and imagining what that next fight may look like. Twenty-First Century Military Innovation outlines the most theoretically important themes in contemporary warfare, especially as these appear in distinctive innovations that signal changes in states’ warfighting capacities and their political goals.

Marcus Schulzke examines eight case studies that illustrate the overall direction of military innovation and important underlying themes. He devotes three chapters to new weapons technologies (drones, cyberweapons, and nonlethal weapons), two chapters to changes in the composition of state military forces (private military contractors and special operations forces), and three chapters to strategic and tactical changes (targeted killing, population-centric counterinsurgency, and degradation). Each case study includes an accessible introduction to the topic area, an overview of the ongoing scholarly debates surrounding that topic, and the most important theoretical implications. An engaging overview of the themes that emerge with military innovation, this book will also attract readers interested in particular topic areas.

Marcus Schulzke is the author of Simulating Good and Evil: The Morality and Politics of Videogames (2020), The Pursuit of Moral Warfare: Ethical Theory and Practice in Counterinsurgency Operations (2018), Combat Drones and Support for the Use of Force, with James Walsh (2018).

“Schulzke’s book is an extraordinarily useful read—especially if you are interested in how military innovation is impacting fighting beyond conventional war and changing war itself. His examination of new conflict technologies sheds new light on how these innovations are strongly impacting how countries are and will engage in conflict.”
—Victor Asal, University at Albany
— Victor Asal

“In this wide-ranging book, Marcus Schulzke shows that military innovation reduces the immediate costs and risks of using force, but over a longer horizon undermines the Westphalian international system and their own sovereign authority. New military technologies change how states fight wars in ways that threaten their authority and upend the politics of conflict.”
—James Igoe Walsh, University of North Carolina at Charlotte
— James Igoe Walsh