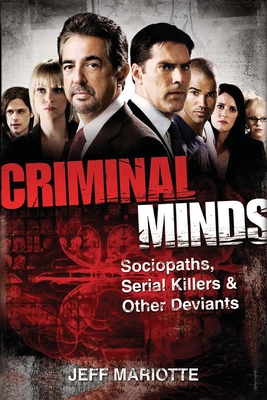 The authorized tie-in to the popular TV show Criminal Minds
Featuring stunning photos from the CBS series, Criminal Minds: Sociopaths, Serial Killers, and Other Deviants will give you new terrifying and fascinating insights into the mind of a criminal.
Most episodes of CBS's Criminal Minds series feature a briefing where the profiling team defines the type of criminal they are looking for by examining behavior patterns that were established in actual criminal cases. Now author Jeff Mariotte takes us deeper into the BAU process by revealing the evil behind some of the most heinous murderers, sexual predators, and psychopaths in history. In this authorized companion to the hit TV series, you'll learn how real-life criminals committed their unspeakable crimes and follow the investigators who finally tracked them down. Mariotte explains why and how profilers organize major offenders into types and why each of these perpetrators falls into a particular category.
You'll get the stories behind: Solo serial killers, such as David Berkowitz, Zodiac, and Henry Lee Lucas Sexual predators who preyed on women and girls, such as Dennis Rader and Gary Ridgway, and those who preyed on men and boys, such as John Wayne Gacy Killers with famous victims, such as John Hinckley, Robert John Bardo, and Mark David Chapman Cannibals and vampirists, such as Jeffrey Dahmer Traveling killers, such as Ted Bundy Female killers, such as Aileen Wuornos Family annihilators, such as John List, Mark Barton, and the Menendez brothers And many more

JEFF MARIOTTE is a mystery writer and the co-owner of Mysterious Galaxy, an independent bookstore specializing in mystery, science fiction, fantasy, and horror. He has written more than three dozen tie-in novels, including two for "CSI" and one for "CSI: Miami" and graphic novels based on both.