Catching Fire: How Cooking Made Us Human (Paperback) 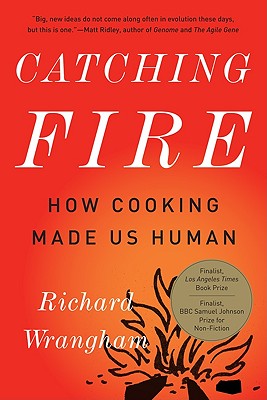 Ever since Darwin and The Descent of Man, the evolution and world-wide dispersal of humans has been attributed to our intelligence and adaptability. But in Catching Fire, renowned primatologist Richard Wrangham presents a startling alternative: our evolutionary success is the result of cooking. In a groundbreaking theory of our origins, Wrangham shows that the shift from raw to cooked foods was the key factor in human evolution. Once our hominid ancestors began cooking their food, the human digestive tract shrank and the brain grew. Time once spent chewing tough raw food could be sued instead to hunt and to tend camp. Cooking became the basis for pair bonding and marriage, created the household, and even led to a sexual division of labor. In short, once our ancestors adapted to using fire, humanity began. Tracing the contemporary implications of our ancestors' diets, Catching Fire sheds new light on how we came to be the social, intelligent, and sexual species we are today. A pathbreaking new theory of human evolution, Catching Fire will provoke controversy and fascinate anyone interested in our ancient origins-or in our modern eating habits.

Richard Wrangham is the Ruth Moore Professor of Biological Anthropology at Harvard University and Curator of Primate Behavioral Biology at the Peabody Museum. He is the co-author of Demonic Malesand and co-editor of Chimpanzee Cultures. He lives in Cambridge, Massachusetts.

"[Catching Fire] makes a convincing case for the importance of cooking in the human diet, finding a connection between our need to eat cooked food in order to survive and our preference for soft foods. The popularity of Wonderbread, the digestion of actual lumps of meat, and the dangers of indulging our taste buds all feature in this expository romp through our gustatory evolution."—Seed Magazine

"Catching Fire is a plain-spoken and thoroughly gripping scientific essay that presents nothing less than a new theory of human evolution...one that Darwin (among others) simply missed."—New York Times

"As new angles go, it's pretty much unbeatable."—San Francisco Chronicle

"Wrangham draws together previous studies and theories from disciplines as diverse as anthropology, biology, chemistry, sociology and literature into a cogent and compelling argument." —Washington Post

"Wrangham's attention to the most subtle of behaviors keeps the reader enrapt...a compelling picture, and one that I now contemplate every time I turn on my stove."—Texas Observer

"[A] fascinating study.... Wrangham's lucid, accessible treatise ranges across nutritional science, Paleontology and studies of ape behavior and hunter-gatherer societies; the result is a tour de force of natural history and a profound analysis of cooking's role in daily life."—Publishers Weekly

"An innovative argument that cooked food led to the rise of modern Homo sapiens.... Experts will debate Wrangham's thesis, but most readers will be convinced by this lucid, simulating foray into popular anthropology."—Kirkus Reviews

"Cooking completely transformed the human race, allowing us to live on the ground, develop bigger brains and smaller mouths, and invent specialized sex roles. This notion is surprising, fresh and, in the hands of Richard Wrangham, utterly persuasive. He brings to bear evidence from chimpanzees, fossils, food labs, and dietitians. Big, new ideas do not come along often in evolution these days, but this is one." —Matt Ridley, author of Genome and The Agile Gene

"Catching Fire is convincing in argument and impressive in its explanatory power. A rich and important book."—Michael Pollan, author of In Defense of Food and The Omnivore's Dilemma