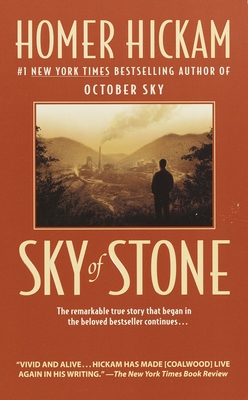 This is book number 3 in the Coalwood series.

Homer Hickam won the praise of critics and the devotion of readers with his first two memoirs set in the hardscrabble mining town of Coalwood, West Virginia. The New York Times crowned his first book, the #1 national bestseller October Sky, “an eloquent evocation ... a thoroughly charming memoir.” And People called The Coalwood Way, Hickam’s follow-up to October Sky, “a heartwarmer ... truly beautiful and haunting.”

Now Homer Hickam continues his extraordinary story with Sky of Stone, dazzling us with exquisite storytelling as he takes us back to that remarkable small town we first came to know and love in October Sky.

In the summer of ‘61, Homer “Sonny” Hickam, a year of college behind him, was dreaming of sandy beaches and rocket ships. But before Sonny could reach the seaside fixer-upper where his mother was spending the summer, a telephone call sends him back to the place he thought he had escaped, the gritty coal-mining town of Coalwood, West Virginia. There, Sonny’s father, the mine’s superintendent, has been accused of negligence in a man’s death—and the townspeople are in conflict over the future of the town.

Sonny’s mother, Elsie, has commanded her son to spend the summer in Coalwood to support his father. But within hours, Sonny realizes two things: His father, always cool and distant with his second son, doesn’t want him there ... and his parents’ marriage has begun to unravel. For Sonny, so begins a summer of discovery—of love, betrayal, and most of all, of a brooding mystery that threatens to destroy his father and his town.

Cut off from his college funds by his father, Sonny finds himself doing the unimaginable: taking a job as a “track-laying man,” the toughest in the mine. Moving out to live among the miners, Sonny is soon dazzled by a beautiful older woman who wants to be the mine’s first female engineer.

And as the days of summer grow shorter, Sonny finds himself changing in surprising ways, taking the first real steps toward adulthood. But it’s a journey he can make only by peering into the mysterious heart of Coalwood itself, and most of all, by unraveling the story of a man’s death and a father’s secret.

In Sky of Stone, Homer Hickam looks down the corridors of his past with love, humor, and forgiveness, brilliantly evoking a close-knit community where everyone knows everything about each other’s lives—except the things that matter most. Sky of Stone is a memoir that reads like a novel, mesmerizing us with rich language, narrative drive, and sheer storytelling genius.

Homer H. Hickam, Jr., was born and raised in Coalwood, West Virginia. The author of Torpedo Junction, a Military History Book of the Month Club selection, as well as numerous articles for such publications as Smithsonian Air and Space and American History Illustrated, he is a NASA payload training manager for the International Space Program and lives in Huntsville, Alabama.