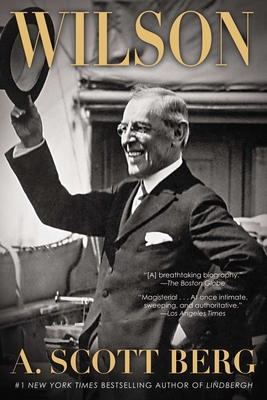 From the #1 New York Times bestselling author, "a brilliant biography"* of the 28th president of the United States.
*Doris Kearns Goodwin

One hundred years after his inauguration, Woodrow Wilson still stands as one of the most influential figures of the twentieth century, and one of the most enigmatic. And now, after more than a decade of research and writing, Pulitzer Prize–winning author A. Scott Berg has completed Wilson—the most personal and penetrating biography ever written about the twenty-eighth President.

In addition to the hundreds of thousands of documents in the Wilson Archives, Berg was the first biographer to gain access to two recently discovered caches of papers belonging to those close to Wilson. From this material, Berg was able to add countless details—even several unknown events—that fill in missing pieces of Wilson’s character, and cast new light on his entire life.

From the visionary Princeton professor who constructed a model for higher education in America to the architect of the ill-fated League of Nations, from the devout Commander in Chief who ushered the country through its first great World War to the widower of intense passion and turbulence who wooed a second wife with hundreds of astonishing love letters, from the idealist determined to make the world “safe for democracy” to the stroke-crippled leader whose incapacity—and the subterfuges around it—were among the century’s greatest secrets, from the trailblazer whose ideas paved the way for the New Deal and the Progressive administrations that followed to the politician whose partisan battles with his opponents left him a broken man, and ultimately, a tragic figure—this is a book at once magisterial and deeply emotional about the whole of Wilson’s life, accomplishments, and failings. This is not just Wilson the icon—but Wilson the man.

A. Scott Berg is the author of Wilson and four previous bestselling biographies: Max Perkins: Editor of Genius (1978) winner of the National Book Award; Goldwyn, for which he received a Guggenheim Fellowship; Lindbergh, winner of the Pulitzer Prize; and Kate Remembered, his biographical memoir of Katharine Hepburn. Berg lives in Los Angeles.

Praise for A. Scott Berg’s Wilson

“Magisterial . . . At once intimate, sweeping, and authoritative.”—Los Angeles Times

“Berg, an elegant, prizewinning biographer whose fluent prose and honest sense of majesty have much in common with Wilson’s own writing, is especially well-suited to his subject.”—The New Yorker

“With the prescience that all truly great biographers possess, Berg discovered in Woodrow Wilson a figure who would understand Washington’s current state of affairs.”—Vanity Fair

“Mr. Berg’s Wilson succeeds magnificently . . . It is no mean biographical achievement to have revealed Wilson the man with such delicacy and empathy.”—The Washington Times

“The most personal and penetrating biography written about the twenty-eighth president.”—New York Daily News

“By far the best single study of Wilson’s life and times . . . Berg’s study should remain the standard biography of this tragic figure for a long time.”—The Philadelphia Inquirer

“Should be required reading . . . Berg’s illumination of the president’s humanity is riveting.”—Fort Worth Star-Telegram

“An astonishing tale, narrated with moving efficiency and precision by Scott Berg.”—Robert McCrum, The Guardian (UK)

“Penetrating . . . readers can walk away with a profound and unique perspective on the man, offered by one of our most gifted biographers.”—Deseret News

“It has taken nearly a century for someone with Berg’s own, somewhat Wilsonian drive to take the full measure of this singular president whose soul echoes, fitfully, in the professorial aura and singularity of Barack Obama.”—USA Today

“Berg is a masterful biographer; his books on Charles Lindbergh, Samuel Goldwyn, and Max Perkins have received well-deserved plaudits and prizes. Wilson is a comparably rewarding reading experience. . . . An absorbing look at a formative period in American history and a magnanimous appraisal of an uncommon leader whose controversial idealism resounds to this day.”—The Miami Herald

“Exhaustively researched and wonderfully written. . . . This vivid portrait of Wilson and America has much to offer readers who understand that the world and our nation are still confronting many of the issues that Wilson faced in the White House a century ago.”—Bookreporter.com