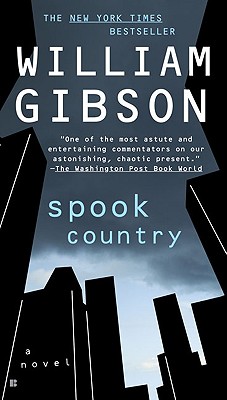 This is book number 2 in the Blue Ant series.

The “cool and scary”(San Francisco Chronicle) New York Times bestseller from the author of Pattern Recognition and Neuromancer.

• spook (spo͞ok) n.: A specter; a ghost. Slang for “intelligence agent.”
• country (ˈkən-trē) n.: In the mind or in reality. The World. The United States of America, New Improved Edition. What lies before you. What lies behind.
• spook country (spo͞ok ˈkən-trē) n.: The place where we all have landed, few by choice. The place we are learning to live.

Hollis Henry is a journalist, on investigative assignment for a magazine called Node, which doesn’t exist yet. Bobby Chombo apparently does exist, as a producer. But in his day job, Bobby is a troubleshooter for military navigation equipment. He refuses to sleep in the same place twice. He meets no one. And Hollis Henry has been told to find him...

“Arguably the first example of the post-post-9/11 novel, whose characters are tired of being pushed around by forces larger than they are—bureaucracy, history and, always, technology—and are at long last ready to start pushing back.”—The New York Times Book Review

“Like Pynchon and DeLillo, Gibson excels at pinpointing the hidden forces that shape our world.”—Details

“[A] dazed, mournful quality…[An] evocation of post-9/11 displacement, the sense of a world in which nothing seems fixed or reassuring…one of our vital novelists.”—Newsday

“Although wearing the trappings of a thriller, Spook Country is essentially a comedy, albeit a dry, dark, and disturbing one.”—San Francisco Chronicle

“A fitful, fast-forward spy tale...It’s to Gibson’s credit that he weaves his strands of disparate narrators, protagonists and foils, and his panoply of far-forward technology, into a vivid, suspenseful and ultimately coherent tale.”—USA Today

“Part thriller, part spy novel, part speculative fiction, Gibson’s provocative work is like nothing you have ever read before.”—Library Journal

“Gibson excels as usual in creating an off-kilter atmosphere of vague menace.”—Kirkus Reviews