Shadow Divers: The True Adventure of Two Americans Who Risked Everything to Solve One of the Last Mysteries of World War II (Paperback) 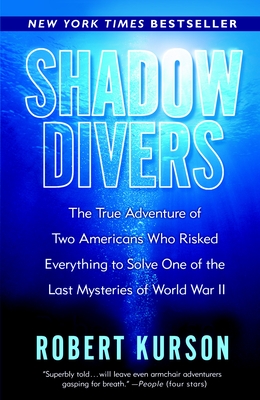 In the tradition of Jon Krakauer’s Into Thin Air and Sebastian Junger’s The Perfect Storm comes a true tale of riveting adventure in which two weekend scuba divers risk everything to solve a great historical mystery–and make history themselves.

For John Chatterton and Richie Kohler, deep wreck diving was more than a sport. Testing themselves against treacherous currents, braving depths that induced hallucinatory effects, navigating through wreckage as perilous as a minefield, they pushed themselves to their limits and beyond, brushing against death more than once in the rusting hulks of sunken ships.
But in the fall of 1991, not even these courageous divers were prepared for what they found 230 feet below the surface, in the frigid Atlantic waters sixty miles off the coast of New Jersey: a World War II German U-boat, its ruined interior a macabre wasteland of twisted metal, tangled wires, and human bones–all buried under decades of accumulated sediment.
No identifying marks were visible on the submarine or the few artifacts brought to the surface. No historian, expert, or government had a clue as to which U-boat the men had found. In fact, the official records all agreed that there simply could not be a sunken U-boat and crew at that location.

Over the next six years, an elite team of divers embarked on a quest to solve the mystery. Some of them would not live to see its end. Chatterton and Kohler, at first bitter rivals, would be drawn into a friendship that deepened to an almost mystical sense of brotherhood with each other and with the drowned U-boat sailors–former enemies of their country. As the men’s marriages frayed under the pressure of a shared obsession, their dives grew more daring, and each realized that he was hunting more than the identities of a lost U-boat and its nameless crew.

Author Robert Kurson’s account of this quest is at once thrilling and emotionally complex, and it is written with a vivid sense of what divers actually experience when they meet the dangers of the ocean’s underworld. The story of Shadow Divers often seems too amazing to be true, but it all happened, two hundred thirty feet down, in the deep blue sea.

Robert Kurson earned a bachelor’s degree in philosophy from the University of Wisconsin and a law degree from Harvard Law School. His award-winning stories have appeared in The New York Times Magazine, Rolling Stone, and Esquire, where he was a contributing editor. He is the New York Times bestselling author of Shadow Divers, the 2005 American Booksellers Association’s nonfiction Book Sense Book of the Year; Crashing Through, based on Kurson’s 2006 National Magazine Award–winning profile in Esquire of the blind speed skier, CIA analyst, and entrepreneur Mike May; and Pirate Hunters. He lives in Chicago.

“An engrossing saga of the suspenseful, intriguing, and dangerous underwater investigation of a Mystery U-boat.”
–CLIVE CUSSLER

“Robert Kurson’s Shadow Divers, about the divers exploring a sunken shipwreck off the New Jersey coast, is a gripping account of real-life adventurers and a real-life mystery. In addition to being compellingly readable on every page, the book offers a unique window on the deep, almost reckless nature of the human quest to know.”
–SCOTT TUROW, author of Reversible Errors

“A tremendously suspenseful story of discovery that comes as close as any book could to providing the reader with approximate sensations of deep sea diving and of life on a submarine at war, and that leaves us with a hell of an impression of the grit, guts, and compassion of a U-boat crew and the two American divers who risked everything to solve the mystery of their last mission.”
–JOHN MCCAIN, author of Faith of My Fathers and Why Courage Matters


“Robert Kurson’s status as an undiscovered pleasure among Chicago readers is about to change, I suspect, in a hurry. Shadow Divers is so culturally astute and terrifyingly suspenseful that it should reach the sort of audience John Berendt, Susan Orlean, Jon Krakauer and Laura Hillenbrand have recently earned. Kurson’s new focus is the larger historical world--a world of U-Boats, forensics and lung-crushing pressure--and his prose is, as always, plain gorgeous.”
–JAMES MCMANUS, author of Positively Fifth Street

“A winning tale exceedingly well told, Shadow Divers takes us on a dangerous and seemingly quixotic descent into the murk–and then, in a fog of nitrogen narcosis, brings us back to the surface with a richer, fuller fathoming of a history we only thought we knew.”
–HAMPTON SIDES, author of Ghost Soldiers: The Epic Account of World War II’s Greatest Rescue Mission