Adults in the Room: My Battle with the European and American Deep Establishment (Paperback) 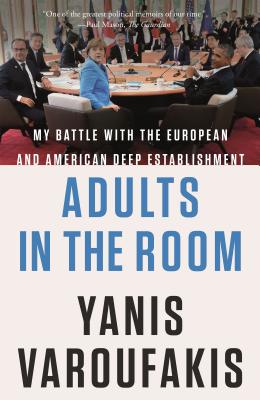 A Number One Sunday Times Bestseller

What happens when you take on the establishment? In Adults in the Room, the renowned economist and former finance minister of Greece Yanis Varoufakis gives the full, blistering account of his momentous clash with the mightiest economic and political forces on earth.

After being swept into power with the left-wing Syriza party, Varoufakis attempts to renegotiate Greece’s relationship with the EU—and sparks a spectacular battle with global implications. Varoufakis’s new position sends him ricocheting between mass demonstrations in Athens, closed-door negotiations in drab EU and IMF offices, and furtive meetings with power brokers in Washington, D.C. He consults and quarrels with Barack Obama, Emmanuel Macron, Christine Lagarde, the economists Larry Summers and Jeffrey Sachs, and others, as he struggles to resolve Greece’s debt crisis without resorting to punishing austerity measures. But despite the mass support of the Greek people and the simple logic of Varoufakis’s arguments, he succeeds only in provoking the fury of Europe’s elite.

Varoufakis’s unvarnished memoir is an urgent warning that the economic policies once embraced by the EU and the White House have failed—and spawned authoritarianism, populist revolt, and instability throughout the Western world. Adults in the Room is an extraordinary tale of brinkmanship, hypocrisy, collusion, and betrayal that will shake the global establishment to its foundations.

Yanis Varoufakis is the former finance minister of Greece and the co-founder of an international grassroots movement, DiEM25, campaigning for the revival of democracy in Europe. He is the author of And the Weak Suffer What They Must? and The Global Minotaur. After many years teaching in the United States, Britain, and Australia, he is currently professor of economics at the University of Athens.

A The Times Politics Book of the Year

"Varoufakis offers a fascinating lens on the euro system and its masters . . . Any political movement that hopes to reassert the values of European social democracy against its current legatees will have much to learn from his example, as well as his books." —J.W. Mason, Boston Review

"A gripping tale of an outspoken intellectual's sudden immersion in high-stakes politics . . . A solid work of explanatory economics. Most of all, though, it is an attempt to divine why smart, seemingly decent politicians and bureaucrats would continue pushing a pointlessly cruel approach long after its pointlessness had become clear . . . Varoufakis does a magnificent job of evoking the absurdities and frustrations of his tenure." —Justin Fox, New York Times Book Review

"If Santa is listening, here’s a suggestion about what to deliver Prime Minister Theresa May of Britain and David Davis, her chief Brexit negotiator: a copy of Yanis Varoufakis’s Adults in the Room. Mr. Varoufakis is the former Greek finance minister and his book sets out in excruciating detail the story of the 2015 negotiations between Greece’s government and its creditors. It feels like necessary reading for the Brexit team." —Kenan Malik, The New York Times

"It reads like a novel centered on a globetrotting, motorcycle-riding hero fighting the forces of darkness and ignorance . . . It is hard to read “Adults in the Room” and not feel admiration for Varoufakis’s commitment to Greece and Europe . . . If Europe is to survive, it will need to pay more attention to democrats and idealists like Varoufakis." —Sheri Berman, The Washington Post

"Varoufakis tells all this with exemplary verve, using stories such as the Faust myth, Frankenstein and even The Matrix. It’s great fun to read . . . Varoufakis has started a debate here, and he’s done it brilliantly"—William Leight, The Evening Standard

"Varoufakis’s account has the narrative drive of a rollicking detective novel .... very good, very readable, and ought to be on all the important “notable books of the year” lists." —Stan Persky, Los Angeles Review of Books

"Varoufakis has written one of the greatest political memoirs of all time . . . It is the inside story of high politics told by an outsider . . . Varoufakis gives one of the most accurate and detailed descriptions of modern power ever written." —Paul Mason, The Guardian

"Riveting . . . An extraordinary account of low cunning at the heart of Greece's 2015 financial bailout . . . [Varoufakis is] a motorcycling, leather jacketed former academic and self-styled rebel who took pleasure in winding up the besuited political class . . . An admirably believable depiction of a Greek and European tragedy." —John Kampfner, The Guardian

"Adults in the Room is a book that anyone interested in modern European politics should read. To say it is the best memoir of the Eurozone crisis is an understatement. It is a devastating indictment of [the] current state of Europe and a fascinating inside account of the logic of reformist politics and its limits and why it keeps going anyway . . . Varoufakis's account of the operations of EU 'decision-making' is truly shocking. He delivers a truly shocking anatomy of an apparatus bent on perpetuating its own bad logic and excluding alternatives." —Adam Tooze, Shelby Cullom Davis Chair of History and Director of the European Institute at Columbia University, and author of The Deluge

"One of my few heroes. As long as people like Varoufakis are around, there still is hope." —Slavoj Žižek

"A very, very clever person, and in the basic argument about what's been going on in Europe I think he's right." —Martin Wolf

"The most interesting man in the world." —Business Insider

"The Thucydides of our time." —Jeffrey Sachs