The Broken Constitution: Lincoln, Slavery, and the Refounding of America (Hardcover) 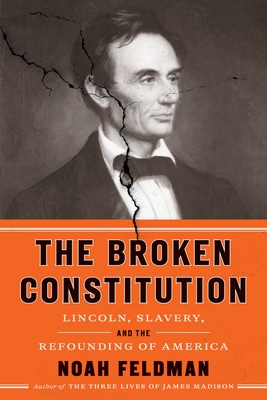 An innovative account of Abraham Lincoln, constitutional thinker and doer

Abraham Lincoln is justly revered for his brilliance, compassion, humor, and rededication of the United States to achieving liberty and justice for all. He led the nation into a bloody civil war to uphold the system of government established by the US Constitution—a system he regarded as the “last best hope of mankind.” But how did Lincoln understand the Constitution?

In this groundbreaking study, Noah Feldman argues that Lincoln deliberately and recurrently violated the United States’ founding arrangements. When he came to power, it was widely believed that the federal government could not use armed force to prevent a state from seceding. It was also assumed that basic civil liberties could be suspended in a rebellion by Congress but not by the president, and that the federal government had no authority over slavery in states where it existed. As president, Lincoln broke decisively with all these precedents, and effectively rewrote the Constitution’s place in the American system. Before the Civil War, the Constitution was best understood as a compromise pact—a rough and ready deal between states that allowed the Union to form and function. After Lincoln, the Constitution came to be seen as a sacred text—a transcendent statement of the nation’s highest ideals.

The Broken Constitution is the first book to tell the story of how Lincoln broke the Constitution in order to remake it. To do so, it offers a riveting narrative of his constitutional choices and how he made them—and places Lincoln in the rich context of thinking of the time, from African American abolitionists to Lincoln’s Republican rivals and Secessionist ideologues.

Noah Feldman is the Felix Frankfurter Professor of Law at Harvard University as well as a Senior Fellow of the Society of Fellows and a member of the American Academy of Arts and Sciences. He is a contributing writer for Bloomberg View.

Before joining the Harvard faculty, Feldman was Cecelia Goetz Professor of Law at New York University School of Law. He was named a Carnegie Scholar in 2005. In 2004, he was a visiting professor at Yale Law School and a fellow of the Whitney Humanities Center. In 2003, he served as senior constitutional advisor to the Coalition Provisional Authority in Iraq, and advised members of the Iraqi Governing Council on the drafting of the Transitional Administrative Law or interim constitution. He served as a law clerk to Justice David H. Souter of the U.S. Supreme Court (1998–1999). Selected as a Rhodes Scholar, he earned a D. Phil. in Islamic Thought from Oxford University and a J.D. from Yale Law School, serving as Book Reviews Editor of the Yale Law Journal. He received his A.B. summa cum laude in Near Eastern Languages and Civilizations from Harvard University in 1992, finishing first in his class.

He is the author of several books, including Cool War: The Future of Global Competition; the award winning and acclaimed Scorpions: The Battles and Triumphs of FDR’s Great Justices; The Fall and Rise of the Islamic State; Divided By God: America's Church-State Problem and What We Should Do About It; and After Jihad: America and the Struggle for Islamic Democracy. With Kathleen Sullivan, he coauthored textbooks on constitutional and first amendment law. He has worked as a contributing writer for the New York Times Magazine.

"Feldman’s book has the potential to change the terms of the ongoing debate over slavery and the Constitution . . . To make rupture and rebirth the central fact of constitutional history is not only to restore to it what Lionel Trilling called a 'lively sense of contingency and possibility'; it is to uphold its continued possibility in our own troubled time." —Geoffrey R. Kirsch, The New Rambler

"[A] magnificent book . . . Feldman skillfully reconciles his expertise as a law professor and his skill as a popular writer, rendering a careful dissection of old legal doctrine accessible and exciting. The reader thinks alongside the great legal minds of the 19th century and feels Lincoln enduring the opposing and sharp pulls of law and politics . . . It is a testament to Feldman’s skills as a scholar and public intellectual that he can make accessible the breaking and remaking of legal norms through vibrant writing and their organization in a rich and novel theoretical framework . . . Feldman’s book will be of interest to scholars, students and the general public." —Joshua Braver, Lawfare

"Feldman offers an elucidating look into Lincoln’s incremental thinking, neatly demonstrating how he articulated the “before” and “after” Constitution in the Gettysburg Address as a compromise versus a moral document, using an Old Testament/New Testament analogy that embodied equality for all promised in the Declaration of Independence. Feldman never bogs down in legalese, rendering a scholarly topic accessible for general readers. A marvelously intricate work on Lincoln’s writings and thoughts, which continue to offer fodder for historians." —Kirkus Reviews (starred review)

"[A] probing study . . . An astute and eye-opening look at an underexamined aspect of the quest to end slavery.” —Publishers Weekly

“With insight and a talent for illumination, Noah Feldman explores our greatest president’s complicated relationship with a document he revered—and changed forever.” —Jon Meacham, author of Thomas Jefferson, American Lion, and His Truth Is Marching On

“Is there really a need for yet another book on Abraham Lincoln? The answer is yes, at least with regard to Noah Feldman’s stunning examination of Lincoln and ‘the broken Constitution.’ It truly needs to be read by anyone interested not only in our tangled and tragic constitutional history but also in the continuing problems that face us today. He conveys in lucid prose the best existing overview of the constitutional issues that Lincoln (and the country) faced with regard to slavery in general and the conduct of the ‘war to preserve the union’ in particular. Whether one is a general reader or a professional academic, this is a book demanding to be read and discussed.” —Sanford Levinson, Centennial Chair at the University of Texas Law School and coauthor of Fault Lines in the Constitution

"With his characteristic verve, erudition, and insight, Noah Feldman explores the constitutional breakup reflected and propelled by the Civil War. That he sheds fresh light on a subject that has been discussed so extensively is deeply impressive.” —Randall Kennedy, professor at Harvard Law School and author of Say It Loud!

“It’s Noah Feldman’s oft-demonstrated great gift to write about complex things clearly, with an eye to what’s important. There are many books about the trials of the Constitution and even more about Lincoln, but very few get both as right as this one.” —David Waldstreicher, author of Slavery’s Constitution: From Revolution to Ratification