Riding The Lightning: A Year in the Life of a New York City Paramedic (Hardcover) 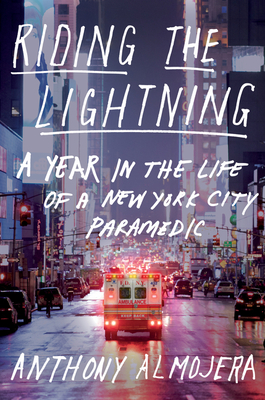 “An intense look at the high-stakes world of a NYC paramedic in the months before and after COVID-19 altered our landscape.”—Damon Tweedy, MD, author of Black Man in a White Coat: A Doctor's Reflections on Race and Medicine

The education of a New York City paramedic, whose tales of tragedy and transcendence over a single year culminate in the greatest challenge the city’s emergency medical system has ever faced: COVID-19.

As a seasoned paramedic and union leader, Anthony Almojera thought he could handle anything his job threw at him. Like many medical first responders, he came from a troubled background and carried the traumas of the city as well as its triumphs. He had grown up in the rough-and-tumble Park Slope of the 1980s, been homeless for a time, and had watched murder, addiction, and hopelessness consume those closest to him. But he had dedicated his life to helping people in need, and while every day was filled with tragedy—stabbings, shootings, accidents, suicides—it also brought moments of uplift: births, resuscitations, and rescues that reminded Anthony and his coworkers why EMS was the most thrilling job on earth, even if the pay was lousy and the hours were long.

So when a strange new virus began spreading in New York, Anthony and his fellow medics were ready. They had done the biohazard drills; they knew the procedures, and how to handle the sick and the bereaved. They believed that their lives and training had prepared them for this new challenge. But the months ahead would prove them wrong, and would push New York’s EMS workers, and Anthony himself, to the breaking point—and beyond.

Following one paramedic into hell and back, Riding the Lightning tells the story of New York City’s darkest days through the eyes of its frontline medical workers and the community they serve: ordinary people who will continue to make New York an extraordinary place long after it has been reborn from the ashes of the COVID-19 pandemic.

ANTHONY ALMOJERA is an FDNY EMS lieutenant and vice president of AFSCME DC37 Local 3621, the New York City Fire Department’s EMS officers’ union. He has been profiled on the front page of the Washington Post and featured by CNN, Al Jazeera, USA Today, NPR, the BBC, and numerous other media outlets. Born in Brooklyn, he is a practicing Buddhist and works a third job as an on-site paramedic at the Aqueduct Racetrack in Queens. He lives in Brooklyn.

“[An] engrossing, first-hand account…This is a tale of resilience, told with a feeling for the grittiness, cultural vibrancy, and immediacy of this multi-ethnic city.” — Library Journal (starred review)

“Almojera explores the physical and emotional flaws of the city residents that he treats and incisively turns the mirror back on himself in the process to reveal his own shortcomings. We also see in clear detail how the system itself is every bit as sick as the people it is charged to serve.”   — Damon Tweedy, MD, author of Black Man in a White Coat: A Doctor's Reflections on Race and Medicine

“Devastating, candid and vital. Almojera guides us, one month at a time, through the tragic first year of the pandemic as seen through the cracked windshield of a New York City ambulance. He doesn’t blink while recounting the price medics have willingly paid to save our lives or the ways that we, collectively, have let them down. This book is a critical addition to the literature of our moment. Almojera lays bare what we’ve just survived, and what we’re trying to survive still.”
— Kevin Hazzard, author of A Thousand Naked Strangers: A Paramedic's Wild Ride to the Edge and Back

“A must-read. Anthony Almojera’s harrowing book traces the life of one paramedic during Covid, offering an unforgettable narrative from the front lines of the battle against the virus, and detailing indescribable loss—but also the power of hope, and the heroism of the first responders who care for our communities.” — Kevin Grange, author of Wild Rescues: A Paramedic’s Extreme Adventures in Yosemite, Yellowstone, and Grand Teton and Lights and Sirens: The Education of a Paramedic

"From the moment I picked up Anthony's book, I couldn't put it down. His account of fighting on the frontlines of the pandemic in New York City is raw and riveting, and reveals in unforgettable detail how humanity was tested in the early days, weeks, and months of the pandemic. Anthony's gifted storytelling invites the reader to sneak a glimpse of that little something we all keep hidden inside us, and assures us that embracing our vulnerability will only make us stronger. I can't recommend this book enough for everyone to read." — Andrew Gounardes, New York State Senator

"Riding the Lightning is a fast-moving chronicle of some of the darkest days New York City has ever known, and a testament to the heroes who helped us survive. With all eyes on New York City—the epicenter of the pandemic—fearless street doctors like Anthony bore the weight of the world by day and the weight of their experiences by night. This book is proof of why there should be no second-class first responders when payday comes. EMS workers are supernatural souls who deserve our respect and a raise." — Justin Brannan, New York City Councilman & Chairman of the Finance Committee

“Anthony Almojera's gut-wrenching, courageous, unsparing memoir may be as close as many of us will ever get to the front seat of an ambulance, but the pages within will change you as well as your understanding of emergency medicine forever. Reading this book is an act of solidarity, a way of honoring the immense sacrifices of EMTs and paramedics during the COVID-19 pandemic by trying to understand them. It’s the least we can do.” — Bryan Doerries, author of The Theater of War: What Ancient Greek Tragedies Can Teach Us Today