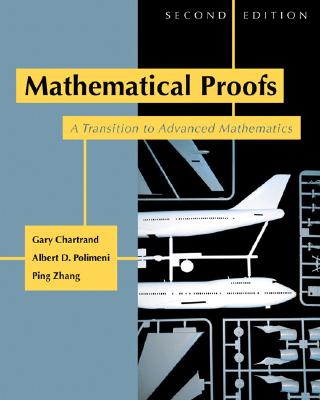 "Mathematical Proofs: A Transition to Advanced Mathematics, 2/e, " prepares students for the more abstract mathematics courses that follow calculus. This text introduces students to proof techniques and writing proofs of their own. As such, it is an introduction to the mathematics enterprise, providing solid introductions to relations, functions, and cardinalities of sets. KEY TOPICS Communicating Mathematics, Sets, Logic, Direct Proof and Proof by Contrapositive, More on Direct Proof and Proof by Contrapositive, Existence and Proof by Contradiction, Mathematical Induction, Prove or Disprove, Equivalence Relations, Functions, Cardinalities of Sets, Proofs in Number Theory, Proofs in Calculus, Proofs in Group Theory. MARKET For all readers interested in advanced mathematics and logic.

Gary Chartrand is Professor Emeritus of Mathematics at Western Michigan University. He received his Ph.D. in mathematics from Michigan State University. His research is in the area of graph theory. Professor Chartrand has authored or co-authored more than 275 research papers and a number of textbooks in discrete mathematics and graph theory as well as the textbook on mathematical proofs. He has given over 100 lectures at regional, national and international conferences and has been a co-director of many conferences. He has supervised 22 doctoral students and numerous undergraduate research projects and has taught a wide range of subjects in undergraduate and graduate mathematics. He is the recipient of the University Distinguished Faculty Scholar Award and the Alumni Association Teaching Award from Western Michigan University and the Distinguished Faculty Award from the State of Michigan. He was the first managing editor of the Journal of Graph Theory. He is a member of the Institute of Combinatorics and Its Applications, the American Mathematical Society, the Mathematical Association of America and the editorial boards of the Journal of Graph Theory and Discrete Mathematics.

Ping Zhang is Professor of Mathematics at Western Michigan University. She received her Ph.D. in mathematics from Michigan State University. Her research is in the area of graph theory and algebraic combinatorics. Professor Zhang has authored or co-authored more than 200 research papers and four textbooks in discrete mathematics and graph theory as well as the textbook on mathematical proofs. She serves as an editor for a series of books on special topics in mathematics. She has supervised 7 doctoral students and has taught a wide variety of undergraduate and graduate mathematics courses including courses on introduction to research. She has given over 60 lectures at regional, national and international conferences. She is a council member of the Institute of Combinatorics and Its Applications and a member of the American Mathematical Society and the Association of Women in Mathematics.