The Puzzle Solver: A Scientist's Desperate Quest to Cure the Illness that Stole His Son (Hardcover) 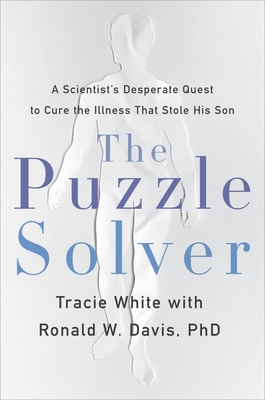 “A renowned geneticist races against time to diagnose a malady that landed at his door… A complex, well-related story of medical detective work.” --KIRKUS
At the age of twenty-seven, Whitney Dafoe was forced to give up his life as a photographer who traveled the world. Bit by bit a mysterious illness stole away the pieces of his life: First, it took the strength of his legs, then his voice, and his ability to eat. Finally, even the sound of a footstep in his room became unbearable. The Puzzle Solver follows several years in which he desperately sought answers from specialist after specialist, where at one point his 6'3" frame dropped to 115 lbs. For years, he underwent endless medical tests, but doctors told him there was nothing wrong. Then, finally, a diagnosis: Chronic Fatigue Syndrome, also known as myalgic encephalomyelitis.

In the 80s, when an outbreak of people immobilized by an indescribable fatigue were reported near Lake Tahoe, Nevada, doctors were at a loss to explain the symptoms. The condition would alternatively be nicknamed Raggedy Ann Syndrome or the Yuppie Disease, and there was no cure or answers about treatment. They were to remain sick.

But there was one answer: Whitney's father, Ron Davis, PhD, a world-class geneticist at Stanford University whose legendary research helped crack the code of DNA, suddenly changed the course of his career in a race against time to cure his son's debilitating condition.

In The Puzzle Solver, journalist Tracie White, who first wrote a viral and award-winning piece on Davis and his family in Stanford Medicine, tells his story. In gripping prose, she masterfully takes readers along on this journey with Davis to solve one of the greatest mysteries in medicine. In a piercing investigative narrative, closed doors are opened, and masked truths are exposed as Davis uncovers new proof confirming that Chronic Fatigue Syndrome is a biological disease.

At the heart of this book is a moving story that goes far beyond medicine, this is a story about how the power of love -- and science -- can shine light in even the darkest, most hidden, corners of the world.

Tracie White is an award-winning journalist and a science writer for Stanford University. Her work, which has garnered 23 writing awards, has also appeared in Salon, the Los Angeles Times, the San Francisco Chronicle, and more. She graduated from UC Berkley and has a master's degree in journalism from Northwestern University. She lives in Aptos, California.

Ronald W. Davis, PhD, has been called one of the world's greatest living inventors by the Atlantic. He is a professor of Biochemistry and Genetics at Stanford University and director of the Stanford Genome Technology Center. He has won numerous awards for his research, including the Gruber Prize in genetics for his groundbreaking contributions to the field of genomics. He now is devoted to finding a cure for Myalgic Encephalomyelitis/Chronic Fatigue Syndrome (ME/CFS).

"THE PUZZLE SOLVER is a medical mystery with a heart. It's a poignant memoir of a scientist whose determination, ingenuity and love for his son drives him to the limits of science and medicine to unravel an enigmatic illness that has eluded doctors for decades." —Steffanie Strathdee, author of The Perfect Predator

"The Puzzle Solver is a compelling story of the love of a father who as a scientist preserved through a maze of uncertainty to help his son. Anyone who has endured undiagnosed chronic illness or has been subjected to the blanket dismissal of the medical community will find refuge in this book. The personal sense of responsibility coupled with the journey for acceptance of this disease as having a biological basis is nothing short of inspiring. A reminder that our lives can change in an instant, are are ultimately dependent upon our love for each other."—Rana Awdish, MD, author of In Shock

"The Puzzle Solver is a love-letter not only to the Dafoe and Davis family but to everyone with crushing chronic illness who nevertheless continue to find meaning and joy in life - and to those who stand behind them. It's both a gripping read and a heart-wrenching story, but far more, it's inspiring, showing how we, and those we love, can band together to withstand challenges, even those beyond your worst nightmares."—Julie Rehmeyer,author of Through the Shadowlands

“A renowned geneticist races against time to diagnose a malady that landed at his door… A complex, well-related story of medical detective work.”—Kirkus

“The author’s keen commitment to capturing Dafoe’s illness and Davis’s work makes for a story of heartbreak balanced with unexpected beauty.”—Publishers' Weekly

“White writes with compassion and empathy... this moving account should increase awareness and pressure for an expedited cure [for Chronic Fatigue Syndrome]."—Booklist

“At its heart, [the book] is about more than just cutting edge research or a race to find the cure for ME/CFS--it's about the unbreakable bond between a father and his son, and the lengths to which a parent will go to save their child's life.”—New Books Network