When We Rise: My Life in the Movement (Paperback) 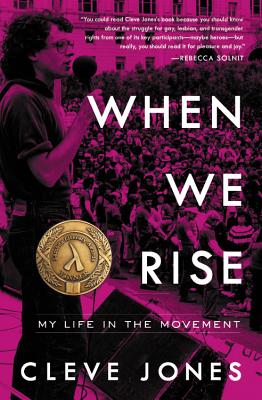 The partial inspiration for the ABC television mini-series!

"You could read Cleve Jones's book because you should know about the struggle for gay, lesbian, and transgender rights from one of its key participants--maybe heroes--but really, you should read it for pleasure and joy."--Rebecca Solnit, author of Men Explain Things to Me

Born in 1954, Cleve Jones was among the last generation of gay Americans who grew up wondering if there were others out there like himself. There were. Like thousands of other young people, Jones, nearly penniless, was drawn in the early 1970s to San Francisco, a city electrified by progressive politics and sexual freedom.

Jones found community--in the hotel rooms and ramshackle apartments shared by other young adventurers, in the city's bathhouses and gay bars like The Stud, and in the burgeoning gay district, the Castro, where a New York transplant named Harvey Milk set up a camera shop, began shouting through his bullhorn, and soon became the nation's most outspoken gay elected official. With Milk's encouragement, Jones dove into politics and found his calling in "the movement." When Milk was killed by an assassin's bullet in 1978, Jones took up his mentor's progressive mantle--only to see the arrival of AIDS transform his life once again.

By turns tender and uproarious, When We Rise is Jones' account of his remarkable life. He chronicles the heartbreak of losing countless friends to AIDS, which very nearly killed him, too; his co-founding of the San Francisco AIDS Foundation during the terrifying early years of the epidemic; his conception of the AIDS Memorial Quilt, the largest community art project in history; the bewitching story of 1970s San Francisco and the magnetic spell it cast for thousands of young gay people and other misfits; and the harrowing, sexy, and sometimes hilarious stories of Cleve's passionate relationships with friends and lovers during an era defined by both unprecedented freedom and and violence alike.

When We Rise is not only the story of a hero to the LQBTQ community, but the vibrantly voice memoir of a full and transformative American life.

Cleve Jones' career as an activist began in San Francisco in 1970s where he befriended pioneer gay rights leader Harvey Milk. After Milk's death, Jones co-founded the San Francisco AIDS Foundation and conceived the idea of the AIDS Memorial Quilt, which memorializes over 85,000 Americans who have died from AIDS. He lives in San Francisco and works as a labor activist.

"You could read Cleve Jones's book because you should know about the struggle for gay, lesbian, and transgender rights from one of its key participants-maybe heroes--but really, you should read it for pleasure and joy. It's an incredibly vivid evocation of a bygone era and a poignant story of someone who started out feeling like the only gay person in the world and ended up organizing millions of them. I loved it for the firsthand history, and the crazily great details about drag queens, radical excess, passionate idealism, how to change the world and everything else that matters most."—Rebecca Solnit, author of Men Explain Things to Me

"I loved this amazing, inspiring, and sometimes outrageous book. When We Rise is about the building of a movement--and the building of Cleve Jones, who came to San Francisco as a teenage adventurer and transformed into an activist whose contributions helped change the course of gay history."—Gus Van Sant

"Cleve Jones is a history buff who has himself become part of history. He has been at the epicenter of the LGBT movement for over 45 years. Now, in When We Rise, Cleve takes us along on his personal journey in the fight for equal rights--a journey filled with humor, sadness, love and ultimately profound change."—Rob Reiner

"Some people witness history; other actually make it happen. Cleve Jones, by planting himself boldly in the eye of the storm, has succeeded brilliantly at doing both."—Armistead Maupin, New York Times bestselling author of the Tales of the City series

"When We Rise is a song to what's best in us, when we join together in a movement that takes us higher. The story Cleve Jones tells-of a bullied boy from the sun-blasted Arizona suburbs, who finds an extended family among the street kids of San Francisco and then within the gay movement that revolutionized the world-is thrilling to read. The path to freedom is littered with the names of fallen loved ones. But through all the sorrows and setbacks, Jones persevered-and the movement for human liberation that he helped lead still rises."—David Talbot, bestselling author of The Season of the Witch and The Devil's Chessboard

"An ode San Francisco.... an inspiring reminder that one can go from 'daydreaming about sex and revolution' to making them reality."—Publishers Weekly

"In this touching and timely memoir, Cleve relives his fascinating life, from adolescent blunders to his conception of the world-famous AIDS Memorial Quilt."—Brit + Co

"Jones takes readers on his thrilling, if perilous, voyage from fey, long-haired teen hitching his way from his home in Arizona to San Francisco, to becoming the mentee of Harvey Milk ... Jones survives San Francisco's viciously homophobic police in the '70s and, later, the AIDS epidemic that took his dearest friends. In the process, he helps mobilize the anguished, fiery momentum of LGBTQ rights in the United States."—Slate

"Sweeping and profoundly moving... At a critical time in our nation's history when many are afraid and so much is uncertain, When We Rise is a pertinent reminder to all to stand up and continue fighting for what we believe in."—Accidental Bear

"Now more than ever we must understand the history of queer activism in order to successfully continue on the legacy of those who came before us... We all need to read [When We Rise]."—Gayletter

"Powerfully written... Jones is a tireless fighter.... By
the end of the book, we practically feel the heartbeat of America, and maybe
it's a good heart, one that can accept love for what it truly is--love."—Bookreporter

"A front row seat to history .... Compelling .... A
mandatory read for future scholars of LGBT history and for queer millennials to
learn about their heritage."—Lambda Literary

"[A] love song to San Francisco ... This unvarnished,
uplifting, opinionated memoir is a testament to Jones' courage."—The Bay Area Reporter

"[A] brilliant memoir."
—The Daily Beast

"When We Rise...brims with fondness, love, lust, inspiration, dedication and tenacity. Older readers will recall each headline-grabbing fight along the way. If I ran the nation's curriculum, it would be required for younger readers."—The Star Tribune