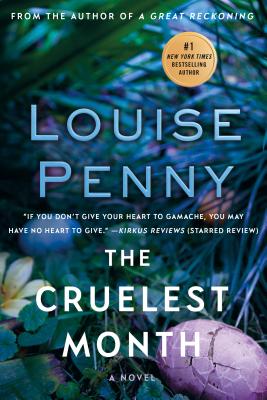 This is book number 3 in the Chief Inspector Gamache Novel series.

Read the series that inspired Three Pines on Prime Video.

"Many mystery buffs have credited Louise Penny with the revival of the type of traditional murder mystery made famous by Agatha Christie ... " -Sarah Weinman

Welcome to Three Pines, where the cruelest month is about to deliver on its threat.

It's spring in the tiny, forgotten village; buds are on the trees and the first flowers are struggling through the newly thawed earth. But not everything is meant to return to life. . .

When some villagers decide to celebrate Easter with a séance at the Old Hadley House, they are hoping to rid the town of its evil---until one of their party dies of fright. Was this a natural death, or was the victim somehow helped along?

Brilliant, compassionate Chief Inspector Armand Gamache of the Sûreté du Québec is called to investigate, in a case that will force him to face his own ghosts as well as those of a seemingly idyllic town where relationships are far more dangerous than they seem.

LOUISE PENNY is the author of the #1 New York Times, USA Today, and Globe and Mail bestselling series of Chief Inspector Armand Gamache novels, and coauthor with Hillary Rodham Clinton of the #1 New York Times bestselling thriller State of Terror. She has won numerous awards, including a CWA Dagger and the Agatha Award (eight times), and was a finalist for the Edgar Award for Best Novel. In 2017, she received the Order of Canada for her contributions to Canadian culture. Louise lives in a small village south of Montréal.

Gamache is a prodigiously complicated and engaging hero, destined to become one of the classic detectives.
---Kirkus Reviews (starred review)

The cozy mystery has a graceful practitioner in Louise Penny.
---The New York Times Book Review


Dont look for the hamlet of Three Pines anywhere on a map . . . although Louise Penny has made the town and its residents so real . . . that you might just try to find it.
---The Chicago Tribune


[A Fatal Grace] is not the usual cosy or even a traditional puzzle mystery. Its a finely written, intelligent, and observant book.
---The Houston Chronicle


A remarkable new writer . . . Louise Penny arrives with flair, humanity, and intrigue in her debut novel, Still Life. . . . Elegant writing alone would not carry this remarkable book; Penny also creates a puzzle worthy of the masters. But more important, she studies issues of good and evil, of human nature, of human kindness, and human cruelty.
---The Richmond Times-Dispatch

This cerebral mystery . . . is a rare treat.
---People on Still Life