The Captured: A True Story of Abduction by Indians on the Texas Frontier (Paperback) 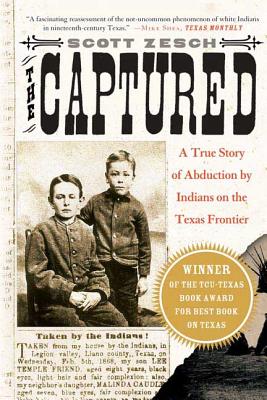 On New Year's Day in 1870, ten-year-old Adolph Korn was kidnapped by an Apache raiding party. Traded to Comaches, he thrived in the rough, nomadic existence, quickly becoming one of the tribe's fiercest warriors. Forcibly returned to his parents after three years, Korn never adjusted to life in white society. He spent his last years in a cave, all but forgotten by his family.

That is, until Scott Zesch stumbled over his own great-great-great uncle's grave. Determined to understand how such a "good boy" could have become Indianized so completely, Zesch travels across the west, digging through archives, speaking with Comanche elders, and tracking eight other child captives from the region with hauntingly similar experiences.

With a historian's rigor and a novelist's eye, Zesch's The Captured paints a vivid portrait of life on the Texas frontier, offering a rare account of captivity.

"A carefully written, well-researched contribution to Western history -- and to a promising new genre: the anthropology of the stolen." - Kirkus Reviews

Scott Zesch grew up in Mason County, Texas and graduated from Texas A&M University and Harvard Law School. He is the author of a novel Alamo Heights and nonfiction book Captured: A True Story of Abduction by Indians on the Texas Frontier, and he is the winner of the Western History Association's Ray Allen Billington Award. He divides his time between New York City and a ranch in Art, Texas (population 3).