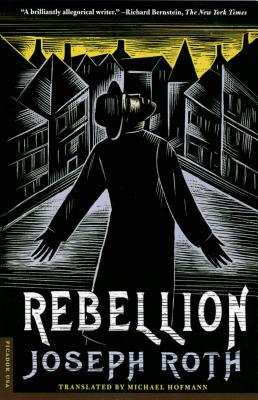 From Joseph Roth, an allegorical yet decidedly modern novelist, comes this story of postwar disillusion, the limits of faith, and "personal fate as governed by the blind, casual workings of a machine controlled by no one and for which no one is responsible" (The New York Times).

When Andreas Pum returns from World War I, he has lost a leg but gained a medal. But unlike his fellow sufferers, Pum maintains his unswerving faith in God, Government, and Authority. Ironically, after a dispute, Pum is imprisoned as a rebel, and all that he believed in is now thrown into upheaval. Moving along at a breakneck clip, Rebellion captures the cynicism and upheavals of a postwar society. Its jazz-like cadences mix with social commentary to create a wise parable about justice and society.

Joseph Roth was born in Galicia in 1894. He worked as a journalist in Vienna and Berlin until Hitler's rise to power. In 1933, he fled to Paris, where he joined a growing community of exiled intellectuals. He died there in 1939.

Michael Hofmann is a poet and frequent contributor to The New York Times Book Review, and is widely regarded as one of the world's foremost translators of works from German to English. His original poetry collections include One Lark, One Horse and Where Have You Been? He has translated Willy Peter Reese's A Stranger to Myself, Joseph Roth's The Tale of the 1002nd Night, Herta Muller's The Land of the Green Plums, and Gottfried Benn's Impromptus. Hofman lives in London.

“Rebellion is reminiscent of Chekhov in its uncluttered, melancholy simplicity, while its sense of the larger, crushing incomprehensibility of things echoes Roth's older contemporary, Frank Kafka.” —Richard Bernstein, The New York Times

“Roth's fictional world is one of terrifying uncertainty and instability, eerily mirroring his own [life]. His is considered by many to be one of the most important Jewish voices in German literature written between the two wars.” —The Forward

“Rebellion puts the last piece of the Roth puzzle in place, leaving readers the gratifying task of exploring the manifold dimensions of this marvelous writer.” —The Boston Globe