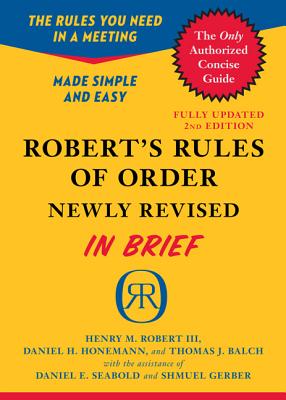 The 1990, ninth edition, of Robert's Rules of Order Newly Revised is the only currently authoritative volume to contain the complete Robert's Rules of Order subject matter. It has been totally reset and redesigned for easier use. This ninth edition supersedes all previous editions and automatically becomes the parliamentary authority in organizations whose bylaws prescribe Robert's Rules of Order. This edition has been updated to address common inquiries, and it incorporates new rules, interpretations, and procedures made necessary by the evolution of parliamentary procedure. Among the more important areas of revision are: more modern and appropriate usage is given for the chair's invitation to members to speak in debate or offer secondary motions after stating the question on a motion the rule relating to the power of replacement of members on committees by the appointing authority is clarified formal recognition is given to the practice of sending a suggested agenda to members in advance of a meeting a subsection of hints to inexperienced presiding officers had been improved greater prominence is given to rules relating to the growing practice of nominating for office by petition specifications are provided for methods of expediting roll-call voting in very large conventions and calling a roll by delegation rather than by individuals In addition, the ninth edition of Robert's Rules of Order Newly Revised includes a special section, printed on tinted paper, which summarizes rules related to motions for quick and easy access.

Henry M. Robert III (1920-2019), grandson of General Robert, began his association with Robert's Rules of Order Newly Revised in writing the 1970 edition and participated in writing six editions, culminating in this 12th edition. He served as parliamentarian of the National Association of Parliamentarians and multiple other national and international organizations.

Daniel H. Honneman, a Maryland attorney, now retired, is a past President of the Maryland Association of Parliamentarians.

Thomas J. Balch is a practicing parliamentarian who formerly acted as a Washington, DC-based lobbyist and legislative analyst. He has served as parliamentarian of the NAP.

Daniel E. Seabold is a mathematics professor at Hofstra University specializing in logic and set theory.

Shmuel Gerber, a professional parliamentarian and copyeditor, has served as the Assistant Editor of the National Parliamentarian.