The Devil's Candy: The Anatomy Of A Hollywood Fiasco (Paperback) 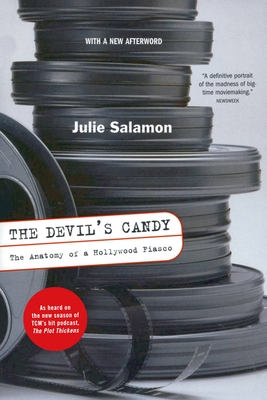 "A definitive portrait of the madness of big-time moviemaking" (Newsweek), now the basis for the new season of TCM's hit podcast, "The Plot Thickens"

When Brian De Palma agreed to allow Julie Salamon unlimited access to the film production of Tom Wolfe's best-selling book The Bonfire of the Vanities, both director and journalist must have felt like they were on to something big. How could it lose? But instead Salamon got a front-row seat at the Hollywood disaster of the decade. She shadowed the film from its early stages through the last of the eviscerating reviews, and met everyone from the actors to the technicians to the studio executives. They'd all signed on for a blockbuster, but there was a sense of impending doom from the start--heart-of-gold characters replaced Wolfe's satiric creations; affable Tom Hanks was cast as the patrician heel; Melanie Griffith appeared mid-shoot with new, bigger breasts. With a keen eye and ear, Salamon shows us how the best of intentions turned into a legendary Hollywood debacle.

The Devil's Candy joins John Gregory Dunne's The Studio, Steven Bach's Final Cut, and William Goldman's Adventures in the Screen Trade as a classic for anyone interested in the workings of Hollywood. With a new afterword profiling De Palma ten years after the movie's devastating flop (and this book's best-selling publication), Julie Salamon has created a riveting insider's portrait of an industry where art, talent, ego, and money combine and clash on a monumental scale.

Author and journalist Julie Salamon has written notable nonfiction books about show business, philanthropy, the Holocaust, the insanity defense, and modern medical care. Her ten previous works include several bestsellers and two novels for children. She was a reporter and critic for the Wall Street Journal and the New York Times.

"A definitive portrait of the madness of big-time moviemaking."—Newsweek

"A great story has found its meticulous teller."—The New Yorker

"One of the best accounts of the making of a movie ever."—Mark Harris, New York Times bestselling author of Mike Nichols and Pictures at a Revolution

"If you’ve listened to the show or read my stuff for long, you know I’m obsessed with the book THE DEVIL’S CANDY."—Linda Holmes, New York Times bestselling author of Evvie Drake Starts Over and Host of NPR's Pop Culture Happy Hour