Dispatches from Planet 3: Thirty-Two (Brief) Tales on the Solar System, the Milky Way, and Beyond (Paperback) 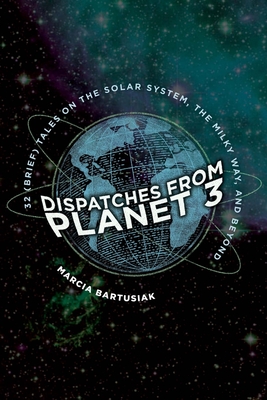 The galaxy, the multiverse, and the history of astronomy are explored in this engaging compilation of cosmological tales by multiple-award-winning science writer Marcia Bartusiak. In thirty-two concise and engrossing essays, the author provides a deeper understanding of the nature of the universe and those who strive to uncover its mysteries.

Bartusiak shares the back stories for many momentous astronomical discoveries, including the contributions of such pioneers as Beatrice Tinsley, with her groundbreaking research in galactic evolution, and Jocelyn Bell Burnell, the scientist who first discovered radio pulsars. An endlessly fascinating collection that you can dip into in any order, these pieces will transport you to ancient Mars, when water flowed freely across its surface; to the collision of two black holes, a cosmological event that released fifty times more energy than was radiating from every star in the universe; and to the beginning of time itself.

Marcia Bartusiak is Professor of the Practice, Graduate Program in Science Writing, Massachusetts Institute of Technology, and the award-winning author of six previous books, including most recently Black Hole: How an Idea Abandoned by Newtonians, Hated by Einstein, and Gambled On by Hawking Became Loved

“Leaves the reader with a renewed sense of wonder about our bizarre and vast cosmic habitat.”—Steven Poole, Wall Street Journal

“The author ranges elsewhere from ringed planets to enormous clusters of galaxies, gravity waves and the big bang, and she properly emphasizes the contributions of some unjustly overlooked women astronomers, such as Jocelyn Bell, who did not share in the 1974 Nobel Prize awarded for her team’s work on neutron stars. The overall effect of the book is like binge-watching an excellent Netflix documentary series and leaves the reader with a renewed sense of wonder about our bizarre and vast cosmic habitat.”—Steven Poole, Wall Street Journal

"An informative and rewarding read for anyone interested in our understanding of the universe."—Booklist

Co-won the 2019 Science Communication Award, sponsored by The American Institute of Physics

Winner of the 2019 Epiphany awards' Science Awareness award, sponsored by the Novim Group

"In this tour of the universe through a mix of well-known and not-so-well-known stories, it's hard to stop and read just one. Fascinating and binge-worthy."--Adam Riess, Nobel Laureate in Physics, 2011

“There is no better guide to the cosmos than Marcia Bartusiak. Here she offers a tour of the heavens that is refreshingly down-to-earth, revealing not only the mysteries of the universe but also the inspiring people who brought those secrets to light."—David Baron, author of American Eclipse

“An intriguing look at the sky from a top-class science journalist who has always been attuned to the most recent advancements of research.”—Carlo Rovelli, author of Seven Brief Lessons on Physics

"A fascinating compendium of essays on what scientists currently think the cosmos is like, and on the road to achieving those insights. Bartusiak takes the reader on a breathtaking journey from our familiar solar system to the speculative multiverse and from the beginning of time to the nature of time." —Mario Livio, author of Brilliant Blunders and Why?