Dictators Without Borders: Power and Money in Central Asia (Paperback) 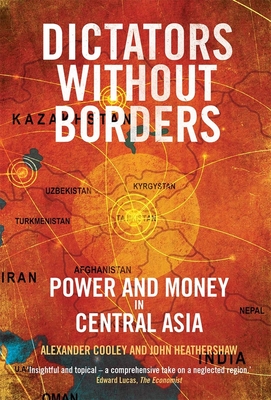 Weak, corrupt, and politically unstable, the former Soviet republics of Kazakhstan, Kyrgyzstan, Tajikistan, and Uzbekistan are dismissed as isolated and irrelevant to the outside world. But are they? This hard-hitting book argues that Central Asia is in reality a globalization leader with extensive involvement in economics, politics and security dynamics beyond its borders. Yet Central Asia’s international activities are mostly hidden from view, with disturbing implications for world security.

Based on years of research and involvement in the region, Alexander Cooley and John Heathershaw reveal how business networks, elite bank accounts, overseas courts, third-party brokers, and Western lawyers connect Central Asia’s supposedly isolated leaders with global power centers. The authors also uncover widespread Western participation in money laundering, bribery, foreign lobbying by autocratic governments, and the exploiting of legal loopholes within Central Asia. Riveting and important, this book exposes the global connections of a troubled region that must no longer be ignored.

“This ambitious and eye-opening book shows what political science at its best  — based on real-world knowledge, free of jargon and focused on substantive concerns rather than disciplinary marginalia — can contribute to pressing contemporary debates.”—Ricardo Soares de Oliveira, TLS
“Dictators without Borders is mandatory reading for those wishing to understand the power dynamics in the region, without falling into the trap of erroneously viewing Central Asia as a region that is closed off from the rest of the world.”—Ana-Maria Anghelescu, Journal of Soviet & Post-Soviet Politics & Society
“A lucid, iconoclastic primer on the region that demolishes the artificial distinction between domestic and international politics in Central Asia once and for all.”—Publishers Weekly
“Salient and important.”—Foreign Affairs
“A lucid, iconoclastic primer on the region that demolished the artificial distinction between domestic and international politics in Central Asia once and for all.”—Publishers Weekly
“A milestone in the study of Central Asia and of the post-Soviet space.”—Journal of Democracy
“An intriguing introduction to globally operating authoritarian elites.”—Henryk Alff, Pacific Affairs
“A poignant account of how the ruling elites of Central Asian countries reap the benefits of interconnectedness while denying civil liberties to their populations.”—Anton Moiseienko, LSE Review of Books
Dictators Without Borders was shortlisted for the Central Eurasian Studies Society 2018 book award.
“This insightful, ground-breaking book goes to the heart of why such governments are among the worst human rights abusers in the world—all the more reason it should be widely read.”—Hugh Williamson, Europe & Central Asia director, Human Rights Watch
'This book shines an important light on the role international financial centres such as London play in facilitating grand corruption and reinforces the urgent need to address this continuing financial system weakness.'- Tom Keatinge, Director, Centre for Financial Crime & Security Studies at RUSI
"Insightful and topical—a comprehensive take on a neglected region."—Edward Lucas, senior editor, Economist
'This panoramic survey of cronyism and corruption in five Central Asian republics delivers a sobering insight into how the dictators in this quarter salt away their ill-gotten gains in offshore funds. But the greatest shock comes from revelations about the apparent complicity or indifference of Western companies, banks, regulators and politicians.' - Tristram Riley-Smith, Director of Research, Department of Politics & International Studies, University of Cambridge