A World after Liberalism: Philosophers of the Radical Right (Hardcover) 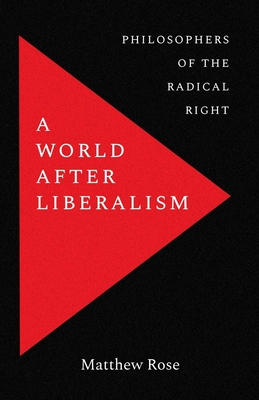 “One of the best books I’ve read this year. . . . Its importance at this critical moment in our history cannot be overstated.”—Rod Dreher, American Conservative

In this eye-opening book, Matthew Rose introduces us to one of the most controversial intellectual movements of the twentieth century, the “radical right,” and discusses its adherents’ different attempts to imagine political societies after the death or decline of liberalism. Rose shows how such thinkers are animated by religious aspirations and anxieties that are ultimately in tension with Christian teachings and the secular values those teachings birthed in modernity.

Matthew Rose is director of the Barry Center on the University and Intellectual Life at the Morningside Institute.

“Electric to read in this moment, and I strongly recommend.”—Ezra Klein, on Twitter

“One of the best books I’ve read this year. . . . Riveting. . . . Its importance at this critical moment in our history cannot be overstated.”—Rod Dreher, American Conservative

“The writing is fluid and compelling. The analysis is succinct and on point. . . . Rose helps readers understand the allure of alternative visions for the ordering of society and the goal of life.”—R.R. Reno, First Things

“As a Christian conservative, Rose has written his book as a warning against the temptation of Christian nationalism. It’s an exceptionally smart map of an important and understudied intellectual tradition. Crisply written and well researched, it is also fair.”—Jeet Heer, Commonweal

“‘I get bored by reading people who are allies,’ liberal Isaiah Berlin once remarked. ‘What is interesting is to read the enemy, because the enemy penetrates the defences.’ Even for those more suspicious than Matthew Rose of once peripheral twentieth-century sages of the far right, this book is useful reading, for transatlantic politics are leading more people to revive these idiosyncratic but interesting reactionaries. Rose draws his portraits well; more every day, his gallery is worth the visit.”—Samuel Moyn, Yale University

“This is one of the best discussions of the extreme right’s intellectual foundations that I have ever read. It provides a balanced, thoughtful approach to a movement that we must take very seriously.”—George Hawley, author of Making Sense of the Alt-Right

“This book changed the way I think about radical right wing politics in America and Europe. Matthew Rose's subjects rarely appear in conventional histories of conservative thought, but his nuanced, humane analysis shows that anyone who wants to understand today’s alt-right and the populist backlash against liberalism needs to take them seriously.”—Molly Worthen, University of North Carolina at Chapel Hill

“The five thinkers surveyed in this even-tempered book lie far outside the orbit of conventional liberal thought. But no liberal, progressive or conservative, can afford to ignore the challenge they pose. Anyone who wants to understand the origin and appeal of the alt-right needs to start here.”—Anthony Kronman, author of The Assault on American Excellence

“A fascinating read. I could not put it down. Rose tells the story of a transnational radical right, which is far more intelligent and worldly than the liberal-left claims.”—Tamir Bar-on, Tecnológico de Monterrey, School of Social Sciences and Government