Three Laws of Nature: A Little Book on Thermodynamics (Hardcover) 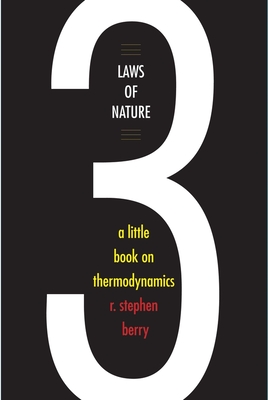 A romantic description of the second law of thermodynamics is that the universe becomes increasingly disordered. But what does that actually mean? Starting with an overview of the three laws of thermodynamics, MacArthur “genius grant" winner R. Stephen Berry explains in this short book the fundamentals of a fundamental science. Readers learn both the history of thermodynamics, which began with attempts to solve everyday engineering problems, and ongoing controversy and unsolved puzzles. The exposition, suitable for both students and armchair physicists, requires no previous knowledge of the subject and only the simplest mathematics, taught as needed.

With this better understanding of one science, readers also gain an appreciation of the role of research in science, the provisional nature of scientific theory, and the ways scientific exploration can uncover fundamental truths. Thus, from a science of everyday experience, we learn about the nature of the universe.

R. Stephen Berry is James Franck Distinguished Service Professor Emeritus at the University of Chicago and a 1983 MacArthur Fellow. His work has contributed to the understanding of the atomic origins of freezing, melting, crystallization, and glass formation.

“The second law of thermodynamics may be the most poorly understood and taught of all of our laws. This bold book meets this admirable challenge, explaining thermodynamics to a popular audience.”—John Wettlaufer, Yale University
“This concise and lucid book pays tribute to the utility and majesty of thermodynamics, evolved from puffs of steam to rank among the mightiest of the sciences.”—Dudley Herschbach, Nobel Laureate in Chemistry, 1986
“The author draws on his mastery of thermodynamics to produce a valuable contribution that is entertaining, informative, and eminently readable.”—David J. Wales FRS, University of Cambridge
“This is a fascinating, thoughtful, and carefully constructed journey through the concepts, development, and significance of a fundamental part of science, its interdependence on technological development, and science’s continuing evolution.”—Ilan Chabay, Institute for Advanced Sustainability Studies
“Whether you’re new to this fundamental science or a seasoned pro, this terrific book makes thermodynamics come alive.”—Harry Gray, California Institute of Technology