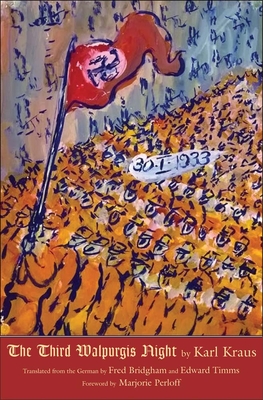 The first complete English translation of a far-seeing polemic, written in 1933 by the preeminent German-language satirist, unmasking the Nazi seizure of power

"[A] drop-dead analysis of the rhetorical barbarities of the Hitler cult."—Bill Marx, Arts Fuse

Austrian satirist and polemicist Karl Kraus’s Third Walpurgis Night was written in immediate response to the Nazi seizure of power in 1933 but was withheld from publication for fear of reprisals against Jews trapped in Germany. Acclaimed when finally published by Kösel Verlag in 1952, it is a devastatingly prescient exposure, giving special attention to the regime’s corruption of language as masterminded by Joseph Goebbels. Bertolt Brecht wrote to Kraus that, in his indictment of Nazism, “you have disclosed the atrocities of intonation and created an ethics of language.” This masterful translation, by the prizewinning translators of Kraus’s The Last Days of Mankind, aims for clarity where Kraus had good reason to be cautious and obscure.

The Austrian Jewish author Karl Kraus (1874–1936) was the foremost German-language satirist of the twentieth century. As editor of the journal Die Fackel (The Torch) he single-handedly after 1912 conducted a sustained critique of propaganda and the press, expressed through polemical essays, satirical plays, witty aphorisms, and resonant poems.

Karl Kraus (1874–1936) was the preeminent German-language satirist, who conducted a sustained critique, notably of propaganda and the press, in his Viennese journal Die Fackel. Translators Fred Bridgham and the late Edward Timms were awarded the MLA Scaglione Prize for their translation of Kraus’s The Last Days of Mankind.

“[A] savage dissection of the Nazi media . . . Kraus’s drop-dead analysis of the rhetorical barbarities of the Hitler cult stands as an inspiring model for what’s needed (steely courage, a strong stomach, prophetic verve) to excoriate the language of autocracy, early and often.”—Bill Marx, Arts Fuse

“No one saw the rise of the demonic Adolf Hitler and Nazism with the clarity Austrian satirist Karl Kraus did . . . Now Bridgham and Timms provide a brilliant translation . . . Essential.”—S. Gittleman, Choice

“The final testament of old-world European humanism in its fading luminescence . . . [by] Vienna’s keenest satirist, Karl Kraus, whose literary energies were devoted largely to the process of unmasking the pretensions of the Austrian bourgeoisie, but later, to the papered-over brutalities of National Socialism, as well.”—Ari Linden, Public Books


“[A] critical bombshell. . . . In the Age of Trump, Kraus’s book could hardly be more timely. . . . In its brilliant and cruel dissection of the Nazi media of 1933, The Third Walpurgisnacht is . . . a truly prophetic work.”—Marjorie Perloff, from the foreword

"When I was a student of German Literature in Berlin in the 1960s, Karl Kraus was seen as a Viennese crank—a curmudgeon with a serious if all too local ax to grind. Too limited, too far away to be interesting. Suddenly, The Third Walpurgis Night reads as if ripped from the front pages of tomorrow’s newspapers. Too real, too frightening, too prescient. The brilliant translation by Fred Bridgham and Edward Timms brings the collapse of Weimar democracy into focus in a way that demands attention. 'Never again' really is the proper response to reading this work."—Sander L. Gilman, co-editor, The Third Reich Sourcebook