How to Rig an Election (Hardcover) 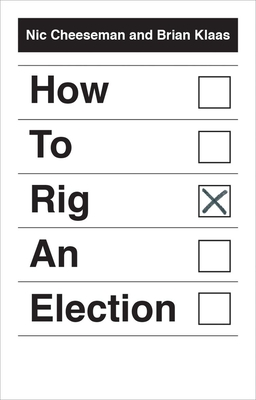 Contrary to what is commonly believed, authoritarian leaders who agree to hold elections are generally able to remain in power longer than autocrats who refuse to allow the populace to vote. In this engaging and provocative book, Nic Cheeseman and Brian Klaas expose the limitations of national elections as a means of promoting democratization, and reveal the six essential strategies that dictators use to undermine the electoral process in order to guarantee victory for themselves. Based on their firsthand experiences as election watchers and their hundreds of interviews with presidents, prime ministers, diplomats, election officials, and conspirators, Cheeseman and Klaas document instances of election rigging from Argentina to Zimbabwe, including notable examples from Brazil, India, Nigeria, Russia, and the United States—touching on the 2016 election. This eye-opening study offers a sobering overview of corrupted professional politics, while providing fertile intellectual ground for the development of new solutions for protecting democracy from authoritarian subversion.

Nic Cheeseman is professor of democracy at the University of Birmingham and founding editor of the Oxford Encyclopedia of African Politics. Brian Klaas is assistant professor of global politics at University College London and a weekly columnist for the Washington Post.

"Clear, punchy, and potentially revolutionary, How to Rig an Election should be read by every voter, civil society activist, opposition politician, election monitor,  journalist and diplomat who has ever come away from a voting booth or tallying  centre feeling angry, worried or frustrated."—Michela Wrong, author of It's Our Turn to Eat
— Michela Wrong

“Democracy is great, unless it can be undermined, manipulated and rigged. This eye-opening and important book is essential reading for everyone who wants to get democracy right again, so that it acts as it should: in the genuinely best interests of each and all.”—A.C. Grayling, author of War
— A.C. Grayling

"Cheeseman and Klaas hit the nail on the head: in many countries elections are a sham. The problem is getting worse, while the international community connives at being deceived. The implications for public policy are profound and will take years to digest. An excellent book.”—Sir Paul Collier, author of Wars, Guns and Votes
— Paul Collier

“A concise, penetrating examination of why and how a growing number of governments are rigging elections, brimming with telling examples and practical recommendations for how concerned international actors can do more to help reverse this disturbing global trend.”—Thomas Carothers, Carnegie Endowment for International Peace
— Thomas Carothers

"Rigging elections has become an art to which the most impressive array of resources are brought to bear even in the poorest countries. This work is a most timely addition to all who care about this important piece in the great democratic jigsaw on which so many basic freedoms depend."—John Githongo
— John Githongo

"Drawing on a rich evidence base, Nic Cheeseman and Brian Klaas explain why authoritarian leaders can get away with setting up counterfeit democracies, and how to put an end to this façade. This book adopts a novel approach and is clear, engaging, beautifully written, and utterly compelling. One of my favourite books of the year."—Alice Evans, King’s College, London
— Alice Evans

“As elections have become the norm worldwide, and a vital indicator of the strength of democracy, so too have the brazen and oft-underhanded attempts by autocrats to use the veneer of a seemingly credible poll to varnish their otherwise horrendous track records. Professor Nic Cheeseman and Brian Klaas offer an incisively sweeping view of this pressing global challenge, and importantly, how to counteract anti-democratic headwinds. This remarkably timely book is an indispensable addition to the desks and bookshelves of activists, academics and courageous pro-democracy crusaders worldwide.”— Jeffrey Smith, Executive Director, Vanguard Africa Foundation
— Jeffrey Smith

“A timely wake-up call to the greatest political paradox of our time. Although more elections are being held than ever before, we are witnessing a worldwide undermining of democracy and democratic processes. This book reveals how elections are being rigged, why it matters and what we can do about it. A must read for anyone fighting for democratic governance and for the voices of citizens and ordinary people.”—Winnie Byanyima, Executive Director, Oxfam International
— Winnie Byanyima