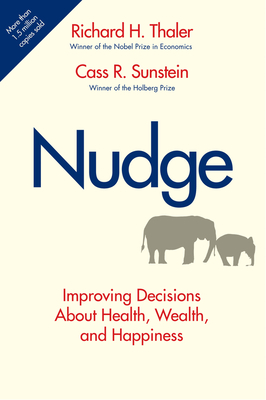 “Save the planet, save yourself. Do-gooders, policymakers, this one's for you.”—Newsweek

Every day, we make decisions on topics ranging from personal investments to schools for our children to the meals we eat to the causes we champion. Unfortunately, we often choose poorly. Nobel laureate Richard Thaler and legal scholar and bestselling author Cass Sunstein explain in this important exploration of choice architecture that, being human, we all are susceptible to various biases that can lead us to blunder. Our mistakes make us poorer and less healthy; we often make bad decisions involving education, personal finance, health care, mortgages and credit cards, the family, and even the planet itself.

In Nudge, Thaler and Sunstein invite us to enter an alternative world, one that takes our humanness as a given. They show that by knowing how people think, we can design choice environments that make it easier for people to choose what is best for themselves, their families, and their society. Using colorful examples from the most important aspects of life, Thaler and Sunstein demonstrate how thoughtful “choice architecture” can be established to nudge us in beneficial directions without restricting freedom of choice. Nudge offers a unique new take—from neither the left nor the right—on many hot-button issues, for individuals and governments alike. This is one of the most engaging and provocative books to come along in many years.

Richard H. Thaler, winner of the 2017 Nobel Prize in Economics, is the Ralph and Dorothy Keller Distinguished Service Professor of Behavioral Science and Economics at the University of Chicago’s Graduate School of Business.  His latest book is Misbehaving:  The Making of Behavioral Economics.  Cass R. Sunstein is the Robert Walmsley University Professor at Harvard Law School and most recently the author of Impeachment:  A Citizen’s Guide.

"[A] new book applying the lessons of social psychology and behavioral economics to everything from health care to climate maintenance. The authors of Nudge . . . agree with economists who'd like to reduce greenhouse gas emissions by imposing carbon taxes or a cap-and-trade system, but they think people need extra guidance."—John Tierney, New York Times

"Two University of Chicago professors sketch a new approach to public policy that takes into account the odd realities of human behavior, like the deep and unthinking tendency to conform. Even in areas—like energy consumption—where conformity is irrelevant. Thaler has documented the ways people act illogically."—Barbara Kiviat, Time

"An engaging and insightful tour through the evidence that most human beings don't make decisions in the way often characterized in elementary economics textbooks, along with a rich array of suggestions for enabling many of us to make better choices, both for ourselves and for society. . . . The conceptual argument is powerful, and most of the authors' suggestions are common sense at its best. . . . For that we should all applaud loudly."—Benjamin M. Friedman, New York Times Book Review

"By a 'nudge,' Thaler and Sunstein mean a policy intervention into choice architecture that is easy and inexpensive to avoid and that alters people's behavior in a predictable way without forbidding any options or significantly changing an individual's economic incentives. . . . Thaler and Sunstein stress that if 'incentives and nudges replace requirements and bans, government will be both smaller and more modest.'"—George F. Will, Newsweek

"This Poor Richard's Almanack for the 21st century . . . shares both the sagacity and the witty and accessible style of its 18th century predecessor."—Benjamin Gregg, Law and Politics Book Review

"As bookstore shelves fill up with works by parlor-room thinkers who would entertain us with their economic nonsense, an entertaining book that also deeply informs could get lost in the shuffle. That book is Nudge. . . . Thaler and Sunstein's . . . attempt to deal with difficult issues is always stimulating."—Gene Epstein, Barron's (One of this season's recommended page-turners on economic, financial and political-economic issues)


Selected as a finalist for the 2008 TIAA-CREF Paul A. Samuelson Award, given by the TIAA-CREF Institute


Silver medal winner of the 2008 Book of the Year Award in the category of Business & Economics, presented by ForeWord magazine

Winner of the 2010 Kulp-Wright Book Award, given by the American Risk and Insurance Association

"In this utterly brilliant book, Thaler and Sunstein teach us how to steer people toward better health, sounder investments, and cleaner environments without depriving them of their inalienable right to make a mess of things if they want to. The inventor of behavioral economics and one of the nation's best legal minds have produced the manifesto for a revolution in practice and policy. Nudge won't nudge you—it will knock you off your feet."—Daniel Gilbert, professor of psychology, Harvard University, Author of Stumbling on Happiness

"This is an engaging, informative, and thoroughly delightful book. Thaler and Sunstein provide important lessons for structuring social policies so that people still have complete choice over their own actions, but are gently nudged to do what is in their own best interests. Well done."—Don Norman, Northwestern University, Author of The Design of Everyday Things and The Design of Future Things

"This book is terrific. It will change the way you think, not only about the world around you and some of its bigger problems, but also about yourself."—Michael Lewis, author of The Blind Side: Evolution of a Game and Liar's Poker

"Richard Thaler and Cass Sunstein's Nudge is a wonderful book: more fun than any important book has a right to be—and yet it is truly both."—Roger Lowenstein, author of When Genius Failed

"How often do you read a book that is both important and amusing, both practical and deep? This gem of a book presents the best idea that has come out of behavioral economics. It is a must-read for anyone who wants to see both our minds and our society working better. It will improve your decisions and it will make the world a better place."—Daniel Kahneman, Princeton University, Nobel Laureate in Economics