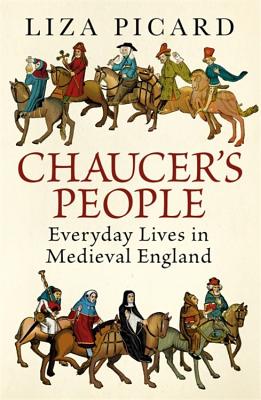 By Liza Picard
Email or call for price
Unavailable

The Middle Ages were turbulent times. In the fourteenth century alone, England was ravaged by war, plague, revolt and the overthrow of a king. Among the surviving records, the poetry of Geoffrey Chaucer is the most vivid. But what does it tell us about the everyday lives of medieval men and women? What did people eat, wear, read and think?

Through the assorted cast of pilgrims Chaucer selected for The Canterbury Tales, Liza Picard brings medieval social history to life. These are lives led beyond the court circles frequented by most of Chaucer's well-heeled audience - lives spent at the pedal of a loom or in uncharted waters on the high seas.

Chaucer would sometimes raise a thought-provoking query in an apparently simple portrait. The Prioress was a sweet, pretty, well-mannered young nun; what was she doing on the road to Canterbury with a mixed band of men, instead of staying in her convent to pray? The Knight was 'a very perfect gentle knight'; but why had his military service landed him in such distant places as Lithuania and Spain? By providing these characters with a three-dimensional framework - the times in which they lived - Picard opens up the fourteenth-century world to us. Drawing on contemporary experiences of a vast range of subjects including trade, religion, toe-curling remedies and hair-raising recipes, Chaucer's People recreates the medieval world in all its glorious detail.