With His Pistol in His Hand: A Border Ballad and Its Hero (Texas Classics) (Paperback) 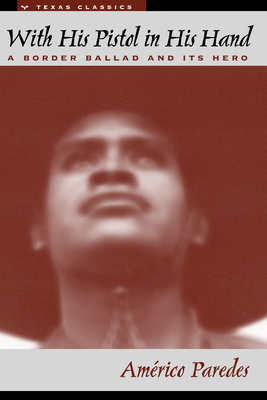 By Américo Paredes
$23.69
Ships from Warehouse, Usually in 1-8 Days

Gregorio Cortez Lira, a ranchhand of Mexican parentage, was virtually unknown until one summer day in 1901 when he and a Texas sheriff, pistols in hand, blazed away at each other after a misunderstanding. The sheriff was killed and Gregorio fled immediately, realizing that in practice there was one law for Anglo-Texans, another for Texas-Mexicans. The chase, capture, and imprisonment of Cortez are high drama that cannot easily be forgotten. Even today, in the cantinas along both sides of the Rio Grande, Mexicans sing the praises of the great sheriff-killer in the ballad which they call El Corrido de Gregorio Cortez. Am rico Paredes tells the story of Cortez, the man and the legend, in vivid, fascinating detail in With His Pistol in His Hand, which also presents a unique study of a ballad in the making. Deftly woven into the story are interpretations of the Border country, its history, its people, and their folkways.