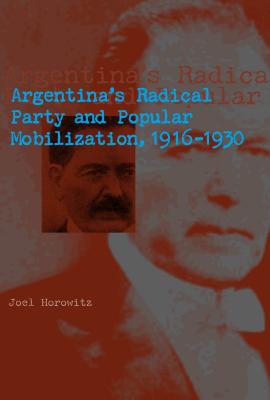 Democracy has always been an especially volatile form of government, and efforts to create it in places like Iraq need to take into account the historical conditions for its success and sustainability. In this book, Joel Horowitz examines its first appearance in a country that appeared to satisfy all the criteria that political development theorists of the 1950s and 1960s identified as crucial. This experiment lasted in Argentina from 1916 to 1930, when it ended in a military coup that left a troubled political legacy for decades to come. What explains the initial success but ultimate failure of democracy during this period?

Horowitz challenges previous interpretations that emphasize the role of clientelism and patronage. He argues that they fail to account fully for the Radical Party government's ability to mobilize widespread popular support. Instead, by comparing the administrations of Hip lito Yrigoyen and Marcelo T. de Alvear, he shows how much depended on the image that Yrigoyen managed to create for himself: a secular savior who cared deeply about the less fortunate, and the embodiment of the nation. But the story is even more complex because, while failing to instill personalistic loyalty, Alvear did succeed in constructing strong ties with unions, which played a key role in undergirding the strength of both leaders' regimes.

Later successes and failures of Argentine democracy, from Juan Per n through the present, cannot be fully understood without knowing the story of the Radical Party in this earlier period.

Joel Horowitz is Professor of History at Saint Bonaventure University.