Big Is Beautiful: Debunking the Myth of Small Business (Paperback) 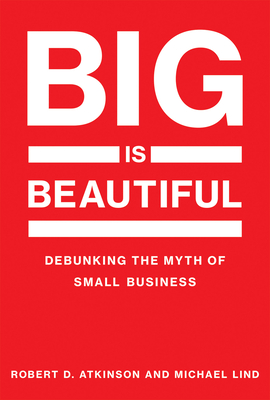 By Robert D. Atkinson, Michael Lind
$19.95
On Our Shelves Now

Why small business is not the basis of American prosperity, not the foundation of American democracy, and not the champion of job creation.

In this provocative book, Robert Atkinson and Michael Lind argue that small business is not, as is widely claimed, the basis of American prosperity. Small business is not responsible for most of the country's job creation and innovation. American democracy does not depend on the existence of brave bands of self-employed citizens. Small businesses are not systematically discriminated against by government policy makers. Rather, Atkinson and Lind argue, small businesses are not the font of jobs, because most small businesses fail. The only kind of small firm that contributes to technological innovation is the technological start-up, and its success depends on scaling up. The idea that self-employed citizens are the foundation of democracy is a relic of Jeffersonian dreams of an agrarian society. And governments, motivated by a confused mix of populist and free market ideology, in fact go out of their way to promote small business. Every modern president has sung the praises of small business, and every modern president, according to Atkinson and Lind, has been wrong.

Pointing to the advantages of scale for job creation, productivity, innovation, and virtually all other economic benefits, Atkinson and Lind argue for a "size neutral" policy approach both in the United States and around the world that would encourage growth rather than enshrine an anachronism. If we overthrow the "small is beautiful" ideology, we will be able to recognize large firms as the engines of progress and prosperity that they are.