Law as Refuge of Anarchy: Societies Without Hegemony or State (Untimely Meditations #15) (Paperback) 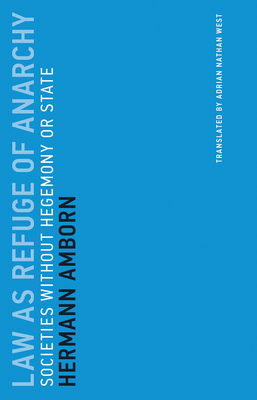 A study of communities in the Horn of Africa where reciprocity is a dominant social principle, offering a concrete countermodel to the hierarchical state.

Over the course of history, people have developed many varieties of communal life; the state, with its hierarchical structure, is only one of the possibilities for society. In this book, leading anthropologist Hermann Amborn identifies a countermodel to the state, describing communities where reciprocity is a dominant social principle and where egalitarianism is a matter of course. He pays particular attention to such communities in the Horn of Africa, where nonhierarchical, nonstate societies exist within the borders of a hierarchical structured state. This form of community, Amborn shows, is not a historical forerunner to monarchy or the primitive state, nor is it obsolete as a social model. These communities offer a concrete counterexample to societies with strict hierarchical structures.

Amborn investigates social forms of expression, ideas, practices, and institutions that oppose the hegemony of one group over another, exploring how conceptions of values and laws counteract tendencies toward the accumulation of power. He examines not only how the nonhegemonic ethos is reflected in law but also how anarchic social formations can exist. In the Horn of Africa, the autonomous jurisdiction of these societies protects against destructive outside influences, offers a counterweight to hegemonic violence, and contributes to the stabilization of communal life. In an era of widespread dissatisfaction with Western political systems, Amborn's study offers an opportunity to shift from traditional theories of anarchism and nonhegemony that project a stateless society to consider instead stateless societies already in operation.