The Prime Number Conspiracy: The Biggest Ideas in Math from Quanta (Paperback) 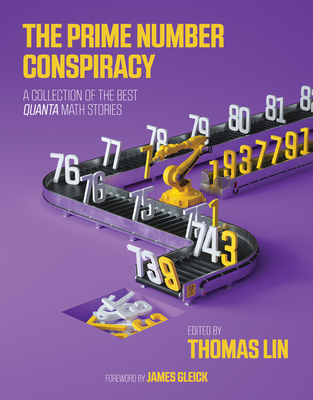 These stories from Quanta Magazine map the routes of mathematical exploration, showing readers how cutting-edge research is done, while illuminating the productive tension between conjecture and proof, theory and intuition. The stories show that, as James Gleick puts it in the foreword, “inspiration strikes willy-nilly.” One researcher thinks of quantum chaotic systems at a bus stop; another suddenly realizes a path to proving a theorem of number theory while in a friend's backyard; a statistician has a “bathroom sink epiphany” and discovers the key to solving the Gaussian correlation inequality. Readers of The Prime Number Conspiracy, says Quanta editor-in-chief Thomas Lin, are headed on “breathtaking intellectual journeys to the bleeding edge of discovery strapped to the narrative rocket of humanity's never-ending pursuit of knowledge.”

Winner of the 2022 Pulitzer Prize for Explanatory Reporting, Quanta is the only popular publication that offers in-depth coverage of the latest breakthroughs in understanding our mathematical universe. It communicates mathematics by taking it seriously, wrestling with difficult concepts and clearly explaining them in a way that speaks to our innate curiosity about our world and ourselves. Readers of this volume will learn that prime numbers have decided preferences about the final digits of the primes that immediately follow them (the “conspiracy” of the title); consider whether math is the universal language of nature (allowing for “a unified theory of randomness”); discover surprising solutions (including a pentagon tiling proof that solves a century-old math problem); ponder the limits of computation; measure infinity; and explore the eternal question “Is mathematics good for you?”

Thomas Lin is the founding editor-in-chief of Quanta Magazine, an online publication that reports on developments in science and mathematics, with content syndicated in publications such as Wired, The Atlantic, Scientific American and The Washington Post. Lin previously worked for The New York Times, where he edited online features and wrote about science, technology and tennis. He has also written for Quanta, The New Yorker, Tennis, and other publications.

James Gleick has written several popular books about science and technology, including Time Travel: A History and Chaos.

Quanta Magazine, from which the essays for this book were drawn, received the 2022 Pulitzer Prize in Explanatory Reporting!

"If you’re a science and data nerd like me, you may be interested in Alice and Bob Meet the Wall of Fire and The Prime Number Conspiracy from Quanta Magazine and Thomas Lin."—Bill Gates

“A solid choice for those who would like to know more about the state-of-the-art in mathematics.” —Library Journal