Tales from a Robotic World: How Intelligent Machines Will Shape Our Future (Hardcover) 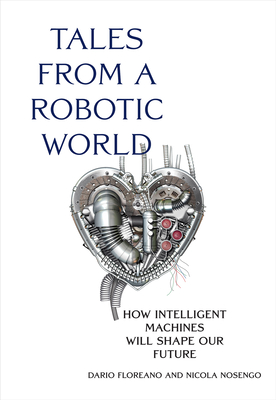 Stories from the future of intelligent machines—from rescue drones to robot spouses—and accounts of cutting-edge research that could make it all possible.

Tech prognosticators promised us robots—autonomous humanoids that could carry out any number of tasks. Instead, we have robot vacuum cleaners. But, as Dario Floreano and Nicola Nosengo report, advances in robotics could bring those rosy predictions closer to reality. A new generation of robots, directly inspired by the intelligence and bodies of living organisms, will be able not only to process data but to interact physically with humans and the environment. In this book, Floreano, a roboticist, and Nosengo, a science writer, bring us tales from the future of intelligent machines—from rescue drones to robot spouses—along with accounts of the cutting-edge research that could make it all possible.

These stories from the not-so-distant future show us robots that can be used for mitigating effects of climate change, providing healthcare, working with humans on the factory floor, and more. Floreano and Nosengo tell us how an application of swarm robotics could protect Venice from flooding, how drones could reduce traffic on the congested streets of mega-cities like Hong Kong, and how a “long-term relationship model” robot could supply sex, love, and companionship. After each fictional scenario, they explain the technologies that underlie it, describing advances in such areas as soft robotics, swarm robotics, aerial and mobile robotics, humanoid robots, wearable robots, and even biohybrid robots based on living cells. Robotics technology is no silver bullet for all the world’s problems—but it can help us tackle some of the most pressing challenges we face.

Dario Floreano is Director of the Laboratory of Intelligent Systems at the Swiss Federal Institute of Technology Lausanne (EPFL). He is the coauthor of Evolutionary Robotics and Bio-Inspired Artificial Intelligence (both published by the MIT Press). Nicola Nosengo is a science writer and science communicator at EPFL. His work has appeared in Nature, the Economist, Wired, and other publications, and he is the Chief Editor of Nature Italy.

"Every speculation is grounded in genuine research, picked over with a keen and critical eye...they do a cracking job."
—The Times