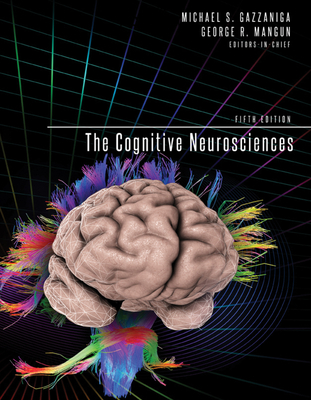 The fifth edition of a work that defines the field of cognitive neuroscience, with entirely new material that reflects recent advances in the field.

Each edition of this classic reference has proved to be a benchmark in the developing field of cognitive neuroscience. The fifth edition of The Cognitive Neurosciences continues to chart new directions in the study of the biological underpinnings of complex cognition—the relationship between the structural and physiological mechanisms of the nervous system and the psychological reality of the mind. It offers entirely new material, reflecting recent advances in the field.

Many of the developments in cognitive neuroscience have been shaped by the introduction of novel tools and methodologies, and a new section is devoted to methods that promise to guide the field into the future—from sophisticated models of causality in brain function to the application of network theory to massive data sets. Another new section treats neuroscience and society, considering some of the moral and political quandaries posed by current neuroscientific methods.

Other sections describe, among other things, new research that draws on developmental imaging to study the changing structure and function of the brain over the lifespan; progress in establishing increasingly precise models of memory; research that confirms the study of emotion and social cognition as a core area in cognitive neuroscience; and new findings that cast doubt on the so-called neural correlates of consciousness.

Steven P. Wise is a Research Biologist in the Senior Biomedical Research Service at the National Institute of Mental Health.

Jason Scott Robert is Lincoln Chair in Ethics, Associate Professor in the School of Life Sciences, and Director of the Lincoln Center for Applied Ethics at Arizona State University.

Olaf Sporns is Distinguished Professor in the Department of Psychological and Brain Sciences, Adjunct Professor in the School of Informatics and Computing, Codirector of the Indiana University Network Science Institute, a member of the programs in Neuroscience and Cognitive Science, and Head of the Computational Cognitive Neuroscience Laboratory at Indiana University Bloomington.

Steven J. Luck is Professor of Psychology and Director of the Center for Mind and Brain at the University of California, Davis. A leading authority on ERP research, he leads ERP Boot Camps that provide ERP training to researchers from around the world.

Bruno A. Olshausen is Associate Professor in the Department of Psychology and the Center for Neuroscience at the University of California, Davis.

Alan Yuille is Professor in the Department of Statistics, University of California, Los Angeles.

Matthew F. S. Rushworth is Professor in the Department of Experimental Psychology and the Centre for Functional MRI of the Brain at Oxford University.

Scott H. Johnson-Frey is Research Associate Professor in the Center for Cognitive Neuroscience at Dartmouth College.

Michael E. Hasselmo is Professor of Psychology and Director of the Computational Neurophysiology Laboratory at Boston University, where he is also a faculty member in the Center for Memory and Brain and the Program in Neuroscience and principal investigator on grants from the National Institute of Mental Health and the Office of Naval Research.

David Poeppel is Professor of Psychology and Neural Science at New York University, and Director of the Department of Neuroscience at the Max Planck Institute for Empirical Aesthetics.

Lorraine Komisarjevsky Tyler is Professor of Psychology at the University of London.

Stephen C. Levinson is Director of the Language and Cognition Group at the Max Planck Institute for Psycholinguistics in the Netherlands.

Morten H. Christiansen is Professor of Psychology and Codirector of the Cognitive Science Program at Cornell University.

Elizabeth A. Phelps is Professor of Psychology at New York University.

Elizabeth A. Phelps is Professor of Psychology at New York University.

Christof Koch is President and Chief Scientist of the Allen Institute for Brain Science in Seattle, following twenty-seven years as a Professor at the California Institute of Technology. He is the author of Consciousness: Confessions of a Romantic Reductionist (MIT Press), The Quest for Consciousness: A Neurobiological Approach, and other books.

Walter Sinnott-Armstrong is Stillman Professor of Practical Ethics in the Philosophy Department and the Kenan Institute for Ethics at Duke University. He edited the previous volumes in Moral Psychology.

James Rodger Fleming is Charles A. Dana Professor of Science, Technology, and Society at Colby College.

A paradigm book....The Cognitive Neurosciences have introduced thousands of students and researchers to the field, giving the text cult status among its readers....[The fifth edition is] an accurate presentation of the current direction in the field....it also emphasizes how cognitive neuroscience is becoming related to other disciplines and how it affects society and the daily life of people.—Minds and Machines—